The United Nations Children’s Fund, UNICEF, and the World Health Organization, WHO, have ranked Nigeria first in Africa and second in the world among countries with the worst malnutrition cases.

According to the UNICEF report published in 2021 entitled: “Fed to Fail? The Crisis of Children’s Diets in Early Life”, Nigeria was placed second in the global malnutrition burden with 17 million undernourished children.

In the report, one in three children in the country is diminutive and one in 10 children is wasted, setting the country off-track to achieving the Sustainable Development Goal (SDG) 2 – “Zero Hunger” by 2030.

“According to the NDHS, South-West has less than seven per cent (6.8) of Global Acute malnutrition and moving up North, it is direr with North-West showcasing 57 per cent in stunting. 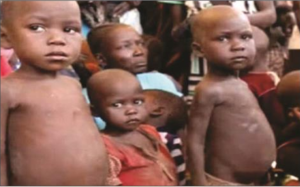 “Only the South-East fared a little low with 18 per cent of children stunted,” the report said.

However, our correspondent gathered that the worsening security challenges, especially in the Northern part of the country have led to the rising pangs of malnutrition among Nigerian children.

A woman, Fatimah has an infant boy, Suleiman that was diagnosed with failure to thrive, a form of malnutrition in UNICEF centre in Sokoto.

Suleiman, as at the time of filing this report, weighed 2.7 kilos, a weight too low for his age.

Fatimah said: “Suleiman became sick after we were sacked from our ancestral home by bandits.

“We lost our lands, properties and other valuables to bandits and now my son is sick. Bandits attacked our village, Kamitau, about 12 months ago.”

She and other mothers together with their ailing infants at Sabon-Gari Dole Primary Health Centre in Goronyo Local Government Area of Sokoto State, are victims of persistent activities of bandits as their children are struck with malnutrition.

Experts say these children’s condition may worsen with the recent report by the United Nations showing that 14.5 million Nigerians require urgent assistance to address their nutrition needs.