Making the Best Use of the International Conference Centre in Awka

One of the legacy projects of the immediate past regime of Chief Willie Obiano as governor of Anambra State was the building of an International Conference Centre located in Awka. Though it is still not finished, there have been doubts as to whether the centre can generate enough funds needed to both recoup the money spent on the project and to yield revenue to the state to embark on other projects.

There have also even been suggestions in some quarters for the place to be turned into a shopping mall to be handled by a group such as Shoprite. According to those behind this suggestion, handing over to such a business group will yield immediate money to the state government and create massive employment.

It is also argued that the centre may not host many conferences in a year, a development that may ask serious questions on the rationale behind its establishment.

They also argue that embarking on the project is a waste of resources, given that just opposite it lies a similar facility called Dora Akunyili Women’s Development Centre. This centre has a hotel and a mini-stadium, apart from the auditorium, which hosts many events. Thus, they wonder why the former administration did not consider extending the place rather than embarking on the building of a similar facility when the state was in dire financial straits. 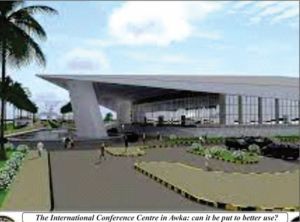 We are inclined to go with those rooting for the International Conference Centre to be put to other money yielding uses. We believe that turning it into a shopping mall will immediately yield money and guarantee quick and regular turn over for the state, rather than having it function as just a conference centre that may not host more than two conferences in a year.

So, why not lease it to such a multi-national company like Shoprite to manage and remit money to the state government? We must not have a brand new conference centre when a similar facility already exists or have one because some states do.

We believe the watchword should always be on the viability of projects, rather than the prestige aspect of such. The money expended on the International Conference Centre could have been better used on the construction or reconstruction of major roads in Awka which are presently in terrible states.

But now that the deed has been done, we are left with an option to either do the needful by turning the place into a goldmine, or go for a prestigious project that may turn out to be a white elephant. With the economy of the state and country looking very unhealthy, taking practical decisions on certain critical matters like the one in question will determine whether or not we can survive this critical period.