The Management of Loretto Special Science School, Adazi-Nnukwu, has commenced the construction of a second ultra-modern hostel block to complement the existing facility to ensure comfortable accommodation for the students and boost academic excellence.

The foundation stone of the ultra-modern hostel block was laid on Sunday, November 14, by the newly appointed Bishop of Nnewi Diocese, Most Rev. Jonas Benson Okoye, who formerly serve as the Auxiliary Bishop of Awka Catholic Diocese.

Bishop Okoye laid the foundation stone during the inauguration of the 2020/2021 Academic Year, Investiture of new students, send off of the 2020 set of students, price giving and thanksgiving day, as well as the commissioning of the new Music Department geared at assisting students to nurture their music potentials.

Leading in the Eucharistic Celebration, Bishop Okoye commended the giant strides which the College administrators had recorded, saying that the school had over the years maintained and sustained its culture of excellence. He said the new project would contribute in the holistic formation of the students and noted that the environment had a way of conditioning the mind.

He praised the efforts of teachers in what he termed the qualitative formation which they offered the students and beckoned on them to continue with the task of grooming the students who he described as future leaders of society.

He said that teaching in a Catholic owned secondary school was mostly difficult due to the time required to ensure that students conformed to the culture of Catholic education.

Advising the students, Bishop Okoye urged them to make effective use of the opportunity provided for them by the school administration and their parents, noting that for them to make headway in life, they must believe in themselves and accept what they were taught. He instructed the students never to forget their teachers, as whatever they become in life would be due to their individual efforts, their teachers’ and parents’ contributions, as well as God’s divine help.

Addressing the newly invested students, the Catholic prelate said the investiture was aimed at inculcating in the students the ideals and principles of the College, saying that the investiture ceremony should mark the students out from their peers. He called on them to bear in mind that their success in life amounted to nothing if they had no regard for God.

Speaking to Fides, the School Manager, Rev. Fr. Hyacinth Azodo, expressed optimism that the new hostel project would be completed within an interval of a year, saying that the school team was working round the clock to offer the students the decent accommodation that would offer them an effective environment to boost learning.

He said that the idea behind the Music Department was conceived after much observation of the decline of the students’ music talent which they had developed in other schools before gaining admission into Loretto. He said that the school management saw the need to set up the music room in order to sustain the music talents of students. 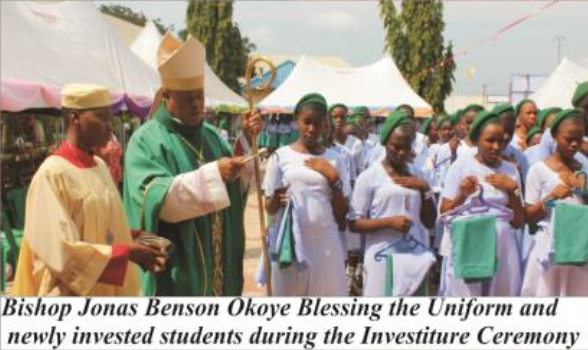 He maintained that for the school to sustain its culture of excellence, it must be holistic and should cut across every dimension. He maintained that the music tutor has all it takes to assist the students groom and nurture talents that had been developed in the field of music.

Contributing, the former Vice Chancellor of ChukwuemekaOdumeguOjukwu University, Prof. Fidelis Okafor, noted that music cut across every individual need in life and described it as the food of the soul. He commended the school Management Team for conceiving the idea behind the Music Department and expressed conviction that the new centre would motivate students to learn different music instruments which would benefit them financially and otherwise later in life.

For his part, Prof. Frank Nnaemeka of the Mass Communication Department, COOU, expressed optimism that his daughter who was newly invested would achieve her dreams and aspiration, saying that the institution had a reputation for quality education. He beckoned on the Management to sustain the culture of excellence; even as he harped on the need for the school administration to look more critically in other areas that would help the student to develop more holistically.

Presentation of academic laurels to deserving students, inauguration of the new academic session, gift presentation by Loretto Old Girls’ Association, cultural dance displays and calisthenics among others. were the highlight of the event.