Sunday 20th day of December will go down as one of the special days for Loretto Special Science School, Adazi- Nnukwu Old Girls as they ended the year in style at St. Thomas Aquinas Catholic Church GRA, Awka.

The end of the year gathering of the Old Girls in Awka witnessed old students, who, among others, represented different sets that passed through the walls of Loretto Special Science school, Adazi-Nnukwu. 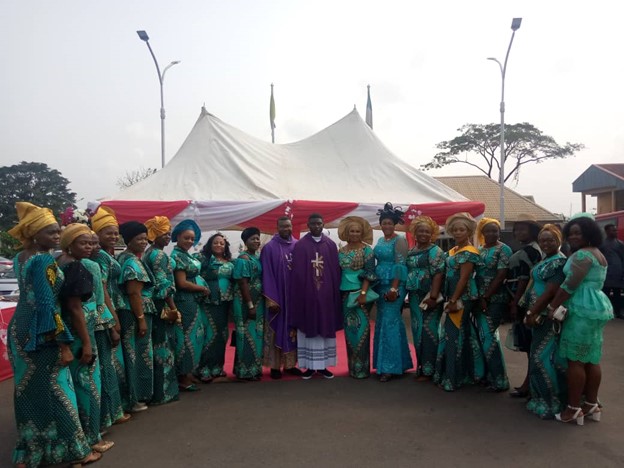 According to the group, the opportunity was seized to thank God for his mercies and protection of the Old Girls throughout the year, especially his protection from the COVID19 pandemic and other challenges that came with the year.

Speaking to Fides, the President LSSSAOGA Anambra State Chapter, Dr Jane Ezeonu, said the event was organized to appreciate God for preserving the Old Girls through the turbulent years. She said that God was faithful in answering the prayers of the Association and in preserving all the members throughout the period of COVID -19.

Dr. Ezeonu said the Association had series of projects lined up for  year, which, according to her, would incorporate the welfare of widows, orphans and the downtrodden in society. This was even as she reiterated that the Association had a cause to help humanity.

She also stated that the Old Girls Association had a ‘think home’ agenda geared towards giving back to the alma mater that made them who they had become in society today, while she preached for unity.

She expressed the Association’s gratitude to God for surviving the difficulties of the year.

Earlier in his homily at St. Thomas Aquinas Catholic Church, GRA, Awka, Fr Michael Obi, the Assistant Manager of Loretto Special Science School, Adazi-Nnukwu, urged Christians to celebrate the nativity of Christ, noting that it was only Christians who valued the gift God had given them that celebrated Christmas.

While saying that Christmas was all about celebrating the enactment of the nativity of the lord, he urged Christians to imbibe the habit of thanksgiving.

Fr Obi reminded Christians that those who were patient with God received the greatest of all gifts and cautioned that religion was primarily a relationship and that until a Christian began to understand the gift of God to him, he would not be a good worshipper.

While he said that 2020 had been a nightmare where Christians were subjected to hardship and suffering, he regretted that most Christians who had received Holy Communion long ago had drifted away from God’s presence and urged them to not allow the corruption of sin to take them away from the place God had prepared for his children.

Speaking at the occasion, a member of the Board of Trustees and chairman of the occasion, Dr Chioma Awuzie Odidika, donated money support to the widows in line with the mission of the association to help the less privileged in society.

Dr. Chioma Odidika extolled the executive of LSSSAOGA Anambra State Chapter, led by Dr. Ezeonu, for organizing such a programme

Meanwhile, the event came alive as Nollywood Actor, Bob Manuel Udokwu, took the participants down memory lane on his road to stardom.

High point of the event was a dancing competition sponsored by the chairman of the occasion, Dr Chioma Awuzie Odidika, which involved little children.

Interestingly, prodigious Stephanie Okechukwu smiled home with N20, 000 as the winner, while Amarachi Umeh and Ezemezue Munachi took home N10, 000 and N5, 000 each for second and third prizes respectively.