Samuel Chukwueze has attracted the attentions of Europe’s top clubs including Liverpool and Chelsea after Lionel Messi placed him third in his vote for the Kopa Trophy, an award for players under 21.

The 20-year-old winger eventually finished ninth in the poll, which was voted for by former Ballon d’Or winners.

Chukwueze could be on his way to Liverpool when the season comes to an end as the Reds were interested in the signing of Nigerian and Villarreal, winger following his impressive performances this season.

Jurgen Klopp’s men were said to have offered Spanish giants Villarreal the sum of £29.5m for them to sign the Nigerian before the January 2020 transfer window closed.

But Villarreal chiefs were said to have rejected the offer from Liverpool thereby insisting that the Reds should meet their £55m release clause for the Super Eagles star.

Chukwueze’s career started flourishing in 2015 when he supported the Nigerian Under 17 Team to win the FIFA World Cup, scoring seven goals in 7 matches played.

Fides gathered that Liverpool wanted to entice Samuel Chukwueze to Anfield in January 2020, but his club in Spain refused to accept the Reds’ offer.

Liverpool chiefs wanted the 20-year-old to provide cover and serious competition for Egypt international Mohamed Salah at Anfield but the Yellow Submarine were holding on to the sum of £55m which Liverpool could not meet during the transfer window.

His current contract at Villarreal will be coming to an end in 2023, but the Yellow Submarine are ready to do business with any club who can meet their release clause.

The Super Eagles Star has not been able to pump in many goals this season for Villarreal as he has scored only three with 3 assists after 22 games.

Villarreal are also occupying eight position on the Spanish La Liga standings with 35 points after 23 games played so far.

Liverpool on the other hand are topping the Premier League standings and the Reds have established a 22-point lead on the table. 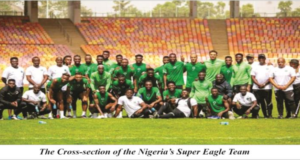