Like Him or Not, Peter Gregory Obi Remains a Strong Institution

I have known His Excellency, Mr Peter Obi for as long as he has been in the limelight, first as a governor who regained his mandate through due process with utmost calmness; as an Ex-governor who not only left remarkable footprints on the sands of time at the expiration of his tenure, but also installed a successor, the very amiable Chief Willie Obiano, who was his friend and professional colleague in the banking sector, to take over from his well-accounted-for government; as an ex-governor who continued to be relevant even way after leaving the shores of the government house and governance.

I also knew him as a Vice Presidential candidate under the PDP who ran alongside Atiku Abubakar during the last Presidential election in our dear country, Nigeria. Today, he is a front runner as he bears the flag of the Labour Party, as he runs for the Number 1 seat of power in the country, the Presidency!!! So far, the movement has been a great one, with Nigerians being passionate about doing things right in 2023.

This is the first time I am seeing Nigerians being focused and determined about getting their PVCs in order to exercise their franchise. It has never happened before. It is truly a movement and I urge all Nigerians reading this to understand that our future is in our hands and so is the future if our unborn generation. We need to be focused about this movement.

We need to keep our eyes on the ball. Let me share the following posts I came across in one of the social media platforms I belong to. The writer is not properly identified. He merely signed off as ‘Daddy Gachi’. I however agree with everything he wrote and enjoyed being taken back to time by his writing. I was taken back to the dark times in this state before Peter Obi came and did his bit to add value to the lives of the people of this state. 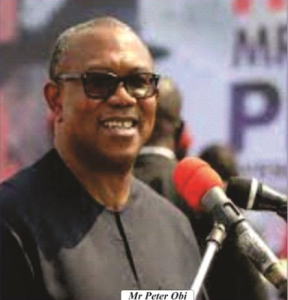 Indeed, what are we without history??? He captioned it  ‘CHUTZPAH OR NOT: THE PETER OBI THAT EVANS FEARS.’ I am guessing he was referring to Evans, the notorious kidnapper. Please read. I hope you enjoy it …

The funniest set of individuals are people who think Peter Obi’s baby voice is a reflection of who he is. The truth is, the title Okwute was not only because he was named after Peter the Rock but because the faint voiced, baby faced business man gave kidnappers, insurrectionists and armed robbers hell and chased them out of Anambra State.

I was born and brought up in Onitsha and I had prior to Peter’s coming, lived through more than 30 daylight bank robberies. If you lived in Onitsha then, you’d remember bike men chasing after white or yellow Mitsbushi L300 bus popularly known and referred to as Onu Azụ to collect their own share of the loot.

Yes, their own share. Bank robbers rob banks, bike men and other brave road users go after them effectively blocking any attempts by police to chase them, bank robbers continue shooting in the air and then after a while, open the back of the bus and spray part of their loots for these men to pick. We lived through the legend of the female bank robbers leader who was also their main shooter.

It was also the time when things like ‘stray bullet’ (Umunachi people call it ‘strange bullet’) entered our dictionary. Unfortunate bystanders get hit and kikled by bullets from these marauding thieves. Upper New Market Road, New Market Road and Old Market Road which was effectively the Central Business District in Onitsha played host to most of the banks in the city was turned into a war zone at least once a month.

Police morale was so low that we all heard stories of police men and women wearing civilian clothes under their uniform, vigilante groups stepped into the lacuna created but with poor funding and legislation weighing them down, there was so much they could do and they most times paid the ultimate price (May the soul of Ideke and the souls of all the brave men and women who died protecting Onitsha continue to rest in peace).

While armed robbers were rampaging on one end, kidnappers led by Evans and other kingpins were cherry picking the elites in the city, Ezego, GUO and a host of others were kidnapped, some kidnaps happened within church premises, schools, eateries and the rest. And then the third end of the criminal trident was made up of petty criminals hiding under the flag of the rising sun and the name MASSOB to hold the commercial city hostage, most people who lived in Onitsha South area of the metropolis will most likely remember that MASSOB under Uwazurike was running an alternate government there, collecting duties and levies and enforcing their own laws.

And then there was Upper Iweka, yes, that Upper Iweka, the name alone sent chills down the spines of travelers and residents, people were robbed there during the day and at night and if they were unfortunate enough, they lost more than their possessions. Then in comes this ‘baby faced, faint voiced former bank manager’ who did the impossible and wrestled power from a sitting governor.

We were bemused to put it lightly and we called him names Adaobi Rita Obi, Ogbono Nkita Obi, amongst others. Because we were a people in love with our chains, we fought against this new order, we composed mocking songs amongst others. But this man ignored us and set out to work. By the time he was done, Oso MASSOB has happened in Fegge.

Evans and others abandoned the state, bank robberies and armed robbery  effectively ended, and Upper Iweka got a new face-lift. Even agberos self collect under Peter Obi, nobody going against the law had it easy under him. He advocated for a law that gave the state the powers to confiscate and demolish premises belonging to kidnappers and other criminal elements and he followed through to the letter.

I remember the midnight and early morning raids, living in Ime Ogbe then, we all woke up to hearing doors being broken and known criminal elements whisked away. Community policing was strengthened as vigilante groups got operating vehicles and other supports from the government, citizens could report crimes and the locations of criminal elements without fear of being exposed.

We went from a state where thieves wrote open letters to homes and communities and still brazenly carry out their threats to a state where one could go to sleep with both eyes closed. And all these happened under a man who you all said that he doesn’t have Chukwuka abi chutzpah. Okwute aburo guy name ooo. And if he says he no dey give shishi, don’t believe him ooo, he gave criminals in the state hell.

I will end this edition by sharing some of the great quotes of Peter Obi. They are words cast in marble. I love them and admire the focus of whoever made out time to put it together. He assembled it and labelled it ‘Peter Obi’s Selling Points From His Speeches’. I also came across it on social media. Kindly read…

My dear readers, all I ask is that every Nigerian should get their PVCs. Have you gotten yours? If you haven’t,  kindly do. It a civic responsibility. Let’s just play our parts and leave the rest to God. As for Peter Obi, he is a movement…the movement!!! Let’s keep it real!!! Daalu nu ooo!!!