Recently, the Spiritual Director of Adoration Ministry, Uke, Rev Fr Emmanuel Obimma; popularly known as Ebube Muonso, went down on his knees to beg those behind the killings in Anambra to sheathe their swords and take recourse to dialogue. Most significantly, he offered to mediate between those people; whoever they may be, and the government.

He went ahead to issue his phone number to the public and prayed those behind the killings to call him and assured of his readiness to come wherever they wanted the talk to hold. 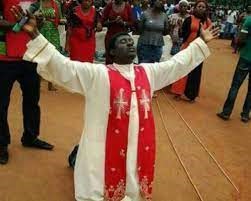 Fr Emma Obimma: he has offered to meet with the unknown gunmen to broker peace

Now, Ebube Muonso has shown himself as a man of God who lives true to his cassock. Not minding the danger inherent in dealing with characters that are unknown and unpredictable, he offered to meet and dialogue with them on behalf of the government and the people.

Now that he has made this brave and touching offer, we think it is an opportunity for the Anambra State Government to leverage that offer with a view to finding a lasting solution to this monstrous problem which has clearly overwhelmed the State Government.

Ebube Muonso’s offer comes at a time when concerted efforts are needed to combat the problem, rather than leaving it only for government to handle. This is why we do not quite agree with the Anambra State Government when it parried the blame to politicians.

We see that action as unnecessary buck passing; being that it will only serve to alienate those who would have wanted to help solve the problem.

It would have been much better if the State Government had produced the culprits before making the allegation. We appreciate the danger of pointing accusing fingers in the wrong direction as that would just about shield the real culprits who will continue carrying out their dastardly acts.

Our conviction that politicians are not responsible for the attacks stems from the fact that virtually every major party has borne the brunt of such attacks. The burning of Joe Igbokwe’s house in Nnewi couldn’t have been done by politicians as Igbokwe is an insider of the All Progressives Congress in Abuja. What then was their gain in burning the house of their member?

That apart, the State Government now has a perfect opportunity to reach out to the unknown gunmen through Ebube Muonso. Since the use of force has failed to yield dividend, it is now time to change tactics and reach out to them before the state becomes totally ungovernable.

If the Federal Government could dialogue with the so-called bandits in the North, what stops our governors in the Southeast from dialoguing with those behind the killings?

What everybody desires is an end to the carnage in the Southeast, particularly Anambra State. The time to confront and end this menace is now, even if it means someone swallowing their pride.

In Fr Ebube Muonso’s offer, our leaders now have a window for a soft landing.