Intent on restoring peace and security in Anambra State, Governor Chukwuma Soludo, has met with Anambra indigenes in Lagos to seek lasting solutions to the menace of hoodlums back home. This is even as he has introduced two security hot lines for people to report cases of insecurity or suspected activities, reports Jude Atupulazi. 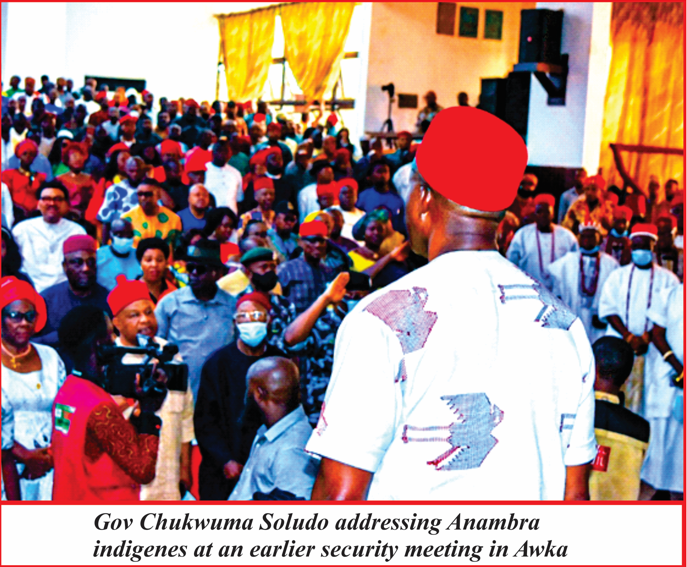 Soludo’s meeting in Lagos in the form of a special dinner, is coming after a similar meeting in Awka with stakeholders last month.

At the meeting last Wednesday, Soludo decried the insecurity ravaging the state and called on the people to rise and salvage their state from the grip of hoodlums masquerading as freedom fighters

He urged citizens of the state to report suspected activities through two hot telephone lines he introduced and assured of confidentiality and swift response. He gave out the phone lines as; 07039896429 and 09017280990.

‘We have released special lines for active citizens’ collaboration in this quest for a peaceful, secure and livable Anambra State. Feel free to report any unlawful activity within and around you. If you see something, say something,’ Soludo urged.

He called on wealthy Anambrarians to donate generously to the state’s Security Trust Fund, stressing that the state government did not have all the resources to effectively combat the rising insecurity in the state.

He also called on the indigenes to move at least fifty percent of their investments to Anambra State to boost the economic development of the state.

He also made a presentation to the audience showing the direction and efforts his government had made in repositioning the state. This include the Okpoko/Onitsha clean up, banning of touts and digitalizing of revenue collection, among others.

He noted that Governor Soludo was determined to build a livable and prosperous homeland for the people of Anambra State but could not achieve it with the level of insecurity.

He called on the people to support the governor to tackle the prevailing insecurity in the state and take it back from criminals so that Anambra State could regain its preeminent position as the safest state in the country.