So far there has been a very impressive turn out of people in the Southeast Zone to register for the 2023 general elections. Across many venues have been coming encouraging developments as people, especially the youths, daily besiege centres where permanent voter’s cards are issued.

Last week a video of traders at Alaba International Market, Lagos, trended in which the traders were asked to go acquire their cards or be refused entry into the market. This goes to show the enthusiasm with which the people are going about the acquisition of the cards.

What is unfolding currently is a sharp but pleasant departure from the past when apathy had been the order of the day. Also to see youths in the majority of those going for the cards gives an indication that finally people are becoming aware of their ability to take their destiny in their hands.

The social media has been awash with pictures and videos of Nigerians, not just the Southeasterners, queuing up to get their cards.

The various state governments, communities, churches and offices are hereby enjoined to sustain the momentum by encouraging their members to go and register. 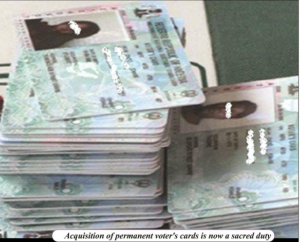 The need for all this is occasioned by the unfolding events in the country where a few people or cabal are bent on forcing themselves on Nigerians, even after they have nothing to show for it over the years. The country has been literally soaked in blood with killings the order of the day. Just last Sunday, many people were murdered in a Catholic Church in Owo, Ondo State, by suspected herdsmen, with the country’s president yet to say anything as at press time.

Such killings have become normal in Nigeria today but the worst thing is the clear lack of will by the federal government to arrest the situation. To date, no one has seen any captured terrorist face trial, while in the main, many of them commit such acts and are never arrested.

Indeed, this is a government that has shown double standards in dealing with her people and this has resulted in the erosion of confidence in the government. This, in turn, has led to agitations by some sections of the country for self-determination, a development that has come with its own problems.

Having become clear that the present federal government has woefully failed, it has become imperative that the citizenry should rally round to vote the government out. The days of pretending or sitting on the fence are gone as the cluelessness of the government in the centre is threatening the very existence of peace loving citizens.

This is why it is important that every effort should be made to mobilize people to vote out this government and enthrone those who can still act like rational human beings. But they cannot be voted out if the people are not able to vote.

We thus call on every institution – Church, offices, market and transport unions, schools and families, to mobilize their members to go and register and acquire the tool with which to flush out this government.

Also the governments of the Southeast should ensure that people are nor frustrated in their attempt to get the cards in order not to deter them from doing so. The time has come for the people to take back their country. It has become a sacred duty.