The Director of Archbishop A.K. Obiefuna Retreat, Pastoral and Conference Centre, Okpuno (ABAKORPACCO), Awka South LGA, Anambra State, Rev Fr Polycarp Chimaobi Okoye, has tasked Christians on lives that bear witness to the word of God, urging them to dispose themselves to be transformed at the reception of the word which he said, was made flesh for humanity.

Rev Fr Okoye, who gave the charge in his homily to mark the Holy Mass for the celebration of the Word of God by the Church, at Good Shepherd Chapel of ABAKORPACCO, last Sunday, January 24, exhorted the faithful against actions inimical to their Christian calling.

According to him, God was a supreme being who outweighed human beings in qualities and caused other beings into existence. 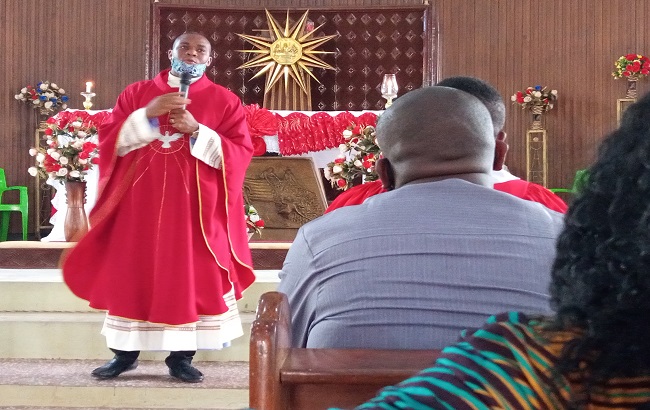 Basing his homily on the theme, “The Word of the Lord”, the Catholic priest described the word of God as the evolution of Divine encounters of different individuals which had oral and written traditions.

On why the readings of the Holy Mass were called “the Word of God”, the priest said it was because God spoke once in history. ‘God has spoken once in Jesus Christ. If Jesus is the summary of Christianity, what it means is that the life of Christians is not limited to the confines of the Bible.

The ABAKORPACCO director said the word of God was eternal, timeless and spanned beyond time and space. He added that the same word which was given to the Israelites in the Old Testament was the same word which God gave to the contemporary Christians, noting that every human being created by God was always in the heart of Jesus, the truth and life.

Rev Fr Okoye, who further based his reflections on the Gospel of the Sunday, urged all to learn from Peter, James and John, who, he said, left everything, and followed Jesus. According to him, the mandate and the summary of the word of God was to follow Jesus Christ, who was the word made flesh.

Pointing out that Christ called the first three apostles when they were carrying out their normal duties, the homilist insisted that God did not demand extraordinary life and spiritual activity from his people, but wanted all to live their normal life and follow him.