…. Lenting Season is NOT just about Food- Fides Director

Insecurity in Anambra made most of our customers Shop Online.

As the Lenten Season  in preparation for the 2022 Easter begins gloabally, traders in Eke Awka Market in Awka South Local Government Area of Anambra State have complained over low patronage from customers reports Alexander Johnson Adejoh and Adejumoke Alebiosu.

In a separate interviews with Fides last Tuesday, March 1, the traders said that patronage this Lenten season was low, adding that they however expected more sales before Easter.

Mr Dahiru Musa, a meat seller at the Kwata market said patronage had been very low this year’s lent compared to what was obtained last year.

‘Lenten Season is always like this, due to Christians abstinence from meat, many of them do not eat meat today and Fridays’.

‘More so people have not started buying what they need for the Easter celebration, I am sure in the next four weeks we will have better sales.

‘Aside from the fasting for Catholics, insecurity in Anambra have made most of our customers to Shop Online.

‘We pray that the Almighty God give us patience to endure, in order to experience high sales according to how He planned it for us.

‘Even though patronage is low now, I am sure of high patronage as time goes on, people will patronise us because they cannot do without eating meat on Easter day,’ Musa said. 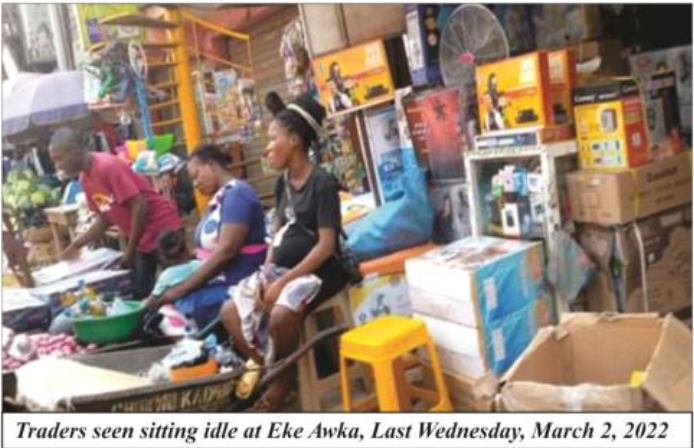 In another development, Rev. Fr Martin Anusi, Director, Fides Media, explained what Christians should do in the Lenten season. He said, ‘Lent goes with this principle: you pray, you fast, you give alms, then, you abstain. What does fasting means, when you fast, it means you are denying yourself of certain things and that thing you deny yourself is meant to be used for the good of the poor and your entire community,’.

‘If you fast from food, the cost of that food, (talking in monetary terms now) if the food you fast from costs 250naira, the idea of lent is that you will have to use that money to give alms to the poor and the needy,’. He said further.

He also said Lenten season is a good time to visit orphanage homes, hospitals and the likes to spend time with people who are in such places.

The Director explained further that Lenten season is a movement and that is why it is meant to better the lives of Christians and people around them.

However, Mrs Anita Ilekwe, who sales fish popularly known as ‘point and Kill’ also said patronage was not encouraging even though she expected things to change before Easter.

‘However, I expect it to record better sales because customers are still coming to buy though the number is negligble’ she said.

Ilekwe who told Fides that her business prime time was evening time noted that her source of livelihood was threaten by the continues attacks by unknown gun men.

Benedictta Ogwu a tomatoes and pepper seller at the front of Eke Awka market, said she was not expecting high patronage in view of the fact that most Catholics were celebrating Ash Wednesday today.

‘Most Christians are celebrating Ash Wednesday today; they will not eat stew and meat today, so they will not buy meat and tomatoes.

‘I believe that soon, patronage will improve,’ she said.

Fides discovered that Tomatoe and pepper sellers in Awka are affected by the current state of the economy which is really affecting business: ‘We are selling daily, but hardly do we meet our expectations, because people have not been coming to buy. They source for alternatives, like using tin tomatoes and dry chili pepper for their cooking.’

Mrs Chinenye Ike who trade in Carbage inside the market said patronage was not high as earlier expected, but added that there was hope for it to raise.

Madam Ike said that patronage would be higher soonest, because according to her, Good Friday is the beginning of the journey to Easter.

‘Easter is the main day for celebration; today is just like a normal day where people come to market and buy what they need.

‘Good Friday celebration is mostly done with activities in the church; but that does not mean that people will not buy thin

‘I thank God for the little sales I have made so far and I also hoped for higher sales tomorrow and henceforth ,’ Ike said.

Another trader, Mr Ikechukwu Onyema, a rice seller, said the patronage was not encouraging, compared to previous Lenten seasons, where people came in large number to buy rice.

He, however attributed the poor patronage to the current economic situation in the country coupled with security threats in Anambra State.