Rev Fr Muojeke, who stated this in his homily of the Holy Mass to mark the 2021 Annual Ash Wednesday at the chapel, last Wednesday, February 17, said Ash Wednesday marked the beginning of the 40-day intensified life of charity and prayer for every Christian. 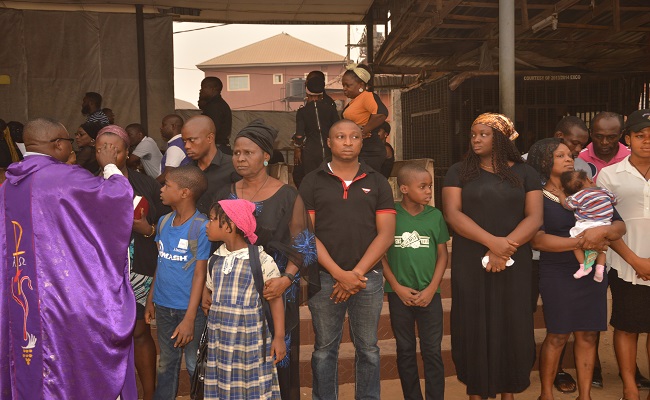 Some of the Christian faithful receive ash on their foreheads on an Ash Wednesday. The ash depicted total repentance and nothingness of man.

He identified prayer, fasting and alms giving as the three pillars of Christian piety which were expected to be intensified by every faithful throughout the Lenten Season.

The priest, who further based his reflections on the readings of the Ash Wednesday, advised all against making a show of their works of charity and fasting, but to instead give in secret and avoid putting on gloomy faces when they fasted. According to him, such life of hypocrisy was abhorred by God.

On Lenten Fast, Rev Fr Muojeke said the Church directed that someone engaging in fasting, ate one full meal and half of the other two meals in a day while observing the obligatory Ash Wednesday and Good Friday fasting. He however said there were other forms of fasting which were optional such as fasting every Friday in lent and fasting from frivolities.

The chaplain explained that abstinence which was obligatory on Ash Wednesdays and Good Fridays for every faithful, meant total denial of meat, while optional abstinence on other day or days in lent, amounted to total denial from something that someone enjoyed the most.

Speaking on Lenten Fast collection, the Catholic priest said it was expected that someone who fasted, should from what he saved from all that he denied himself of, give to the less privileged persons.

Pointing out that alms giving complemented fasting, Fr Muojeke enjoined all to give to the needy, engage in works of charity and contribute to the Lenten fast collections which the Church carried out after Friday’s Stations of the Cross of the Lenten Season, so as to gain the Godly rewards attached to such act of charity.