A fortnight ago I was relaxing under the umbrella tree in front of my residence as gentle cool breeze was permeating into the inner chambers of my entire skin. That day was extraordinarily hot. It was suicidal to stay indoors due to electric power failure. Hand fan could not solve the problem. Suddenly one mentally deranged man of about forty years old appeared from nowhere.

He stood before me and shouted, “Father, we are here! Please do not disturb us with prayer!” I asked him, “You are alone. Where are those ‘we’?” He replied, “Look at them around me. They are uncountable. Have you no eyes? Look well?” I really looked round him and saw no other being except him.

Then he said, “Watch. We are now going to dance for you. Please give us enough money for food that will satisfy all of us.” He started to dance and to command the invisible forces with him. For goodness sake and to allow me rest, I dipped my hands into my poor pocket and gave “them” a reasonable amount of money. 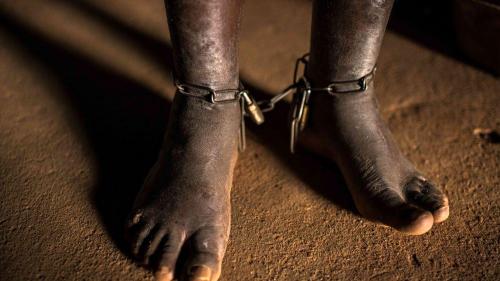 He accepted it with thanks and shouted, “Thank you sir! We shall come again!” I wanted to pray for him and for those invisible forces around him. He shouted, “No! We don’t want that. It will destroy our power!” Immediately he disappeared like lightening. When he left, I went into the Chapel of the Holy of Holies to adore the Lord and to ask him for the grace of seeing invisible forces. The prayer is yet to be answered.

In the Gospel of Saint Luke Chapter 8, Jesus Christ encountered a certain man possessed by demons in the district of the Gerasenes. The possessed man went naked and lived among the dead in the graveyard. He hauled stones at anyone who ventured to come near him. In fact he was uncontrollable.

Many times he had been chained, but each time he broke the heavy chains with which he was bound. Power overcomes power. When he saw Jesus, he yelled and threw himself down before him and shouted, “What do you want with me, Jesus Son of the Most High God? I beg you, do not torment me” (Luke 8:28). Jesus looked at him mercifully into his wild eyes and then asked him, “What is your name?” (Luke 8:30).

The demoniac replied, “My name is Legion because we are many” (Luke 8:30). At that time a great herd of pigs were feeding around there. The Legion of Demons pleaded with Jesus not to destroy them but rather to send them into the pigs that numbered about 2,000.

The Lord Jesus hearkened to their request and commanded the demons to enter into the pigs. This happened instantly. The possessed pigs ran madly into a nearby lake and they were drowned. If this could happen to the herd of pigs at once, imagine the fate of the possessed man over the years of his calamity.

I am also imagining what would have happened to those who might have consumed the meat of those demonic pigs if they were slaughtered.  Thank God they were drowned. Please whenever you go to market to buy meat, kindly ask the seller if the slaughtered animal was possessed. Prevention is better than cure.

Recently someone’s house dog went mad. It became a nuisance to every human being or animal that came around it. Every other dog bitten by the mad dog became mad instantly. Even the fowls within the vicinity which encountered the mad dog ran mad also.

Madness became the common denominator of all living beings within the geographical location of the demonic dog. A courageous hunter living within the area said that enough was enough. He loaded his gun with bullets and went after the mad dog. Since life is of primary value and has no duplicate, the demonic dog ran for its life as the hunter pursued it.

Luckily, the hunter had an advantage. He aimed well at the mad dog on the run and scattered its abdomen with bullets. The mad dog died on the spot. I was upstairs watching the scenario. One man came across and saw the carcass of the demonic dead dog. He looked left and right and saw nobody.

He brought out a big sack and inserted the carcass of the demonic dog into it and went home with it for consumption. Since then my ears have been itching me seriously to hear what happened to the man, his wife and children after consuming the meat of the demonic dog.

Legion has to do with large number of people, things, forces or demons. A group of soldiers is called legion. Yesterday a legion of wild ants invaded my house. I speedily went into my packing store and brought an efficacious insecticide and finished them up.

After some minutes I pitied them as their carcasses lay all over the place. Later some lizards came and ate them up. The powerful chemical in the digestive system of the lizards would render the insecticide powerless. Chief Zebrudaya Okoroigwe Nwogbo said that why he is popularly known as ‘Palm Wine Powerless’ is that any quantity of palm wine he drinks has no effect upon him.

A Legion of demons is currently attacking humanity globally and nationally. Here and there, the demon of insecurity is seriously fighting innocent people going about their daily businesses.

The 2020 Global Terrorism Index ranked our country Nigeria as the third country out of ten countries of the world impacted by terrorism. The ten countries with worst Global Terrorism Index in chronological order include Afghanistan, Iraq, Nigeria, Syria, Somalia, Yemen, Pakistan, India, Democratic Republic of Congo and the Philippines. The Boko Haram terrorists and the Fulani Herdsmen extremists are the deadliest in Nigeria today.

The Legion of Demons attacking people in Nigeria are Boko Haram, Bloody Fulani Herdsmen, Kidnappers and Bandits. They kill, maim, kidnap and rape people all over the country.

They are all related. Some of the demons are Nigerians while some were imported by the powers that be for political reasons. Travelers are in danger because the demons lay ambush along the roads. Farmers are afraid to go to their farms nowadays. Some who ventured to travel or go to farms have been raped, kidnapped and killed in cold blood. Many Nigerians are missing and cannot be accounted for.

Probably they have fallen into the hands of the legion of demons menacing the Giant of Africa. The Giant of Africa has become also the Giant of Demons. The demons have occupied all bushes and forests in the North, Middle Belt, South and East. Blood is flowing everywhere.

Hunger is looming because most farmers have sacrificed their farmlands at the altar of insecurity. The demons seem to possess superior weapons than the Nigerian Military. Thus many soldiers have paid the supreme price just like that. The families of the slain soldiers are mourning without consolation.

Some soldiers have deserted or resigned because of their ugly experience with the demons at the warfront. If armed soldiers are not safe, what becomes the fate of defenseless civilians? No wonder the Governor of Taraba State recently asked the Federal Government to permit Nigerians to lawfully possess arms to defend themselves.

The Legion of demons seems to have overpowered the Federal Government whose primary duty is to protect the lives and properties of all citizens and non citizens living in this country.

Indeed there is no smoke without fire. Some pertinent questions need to be posed and answered: Where and how does the legion of demons obtain their powerful and superior arms? Who are their sponsors? How and from where do they recruit their men?

A common Igbo proverb says, “Oke anaghi eri ihe onye mu anya.” This means that the rat cannot consume the food of someone who is awake. Hence some ethnic groups in Nigeria have risen and said that enough is enough. No one has the monopoly of violence.

They have equipped themselves and entered the forests to drive away the legion of demons attacking, kidnapping for millions of ransom, maiming, raping and killing people here and there on daily basis in this country called Nigeria. There is now fire on the mountain. Where shall we run to?

These demons are more dangerous than COVID-19. We urgently need security body masks to protect our precious lives. The bloody Fulani herdsmen should join the demons in Sambisa forest with their cows with immediate effect. Heaven and hell cannot be at the same place. The Saints live in heaven while evil doers live in hell. God, save us!