Dear Nigerian leaders, I want to appreciate your condolence messages to Singaporeans since my death on Sunday, March 22. Having died at the age of 91, I would not say I died young. In fact, life expectancy in Singapore, which I led as Prime Minister for 31 years, is 80 years for men and 85 for women. You may even say I spent an overtime of 11 years. I would say I lived a good life which I devoted to the progress of my country. I can confidently say that everything I did — including that for which I was heavily criticized for being ‘high-handed’, was for the benefit of my people, not for personal gain.

I died a fulfilled man with no regrets whatsoever. May I briefly tell you the story of Singapore so that you can understand why it is often told with admiration all over the world. We were a small, hopeless Island. We thought we were so poor it was impossible to survive on our own.

We decided to go into a union with other countries to form Malaysia in 1963. But because of ethnic riots, we were expelled from the union in 1965, and I broke down in tears because I did not see how we were going to survive as a country. It was so bad we had no potable water. We relied on other countries for water to drink! We had no natural resources. No oil, no gold, no solid minerals, nothing. 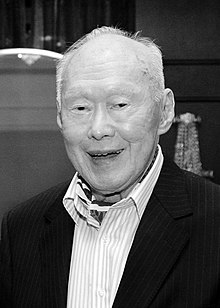 All we had were human beings – and ports. Dear Nigerian leaders, we did not give up. We decided to pick the pieces of our lives. We resolved to turn our fortune around. Today, our story has changed completely. So you know, we are no longer a Third World country. We are one of the four Asian Tigers, so-called because of our incredible development story.

Singapore is the only Asian country with the top AAA rating by all credit rating agencies. We are the fourth largest financial centre in the world. We have one of the five busiest ports in the world. Manufacturing accounts for around 30% of our GDP. And Singapore has the third highest per capita income in the world. Permit me some more immodesty.

Meanwhile, Nigeria, the sixth largest oil producer in the world, has been importing petrol, diesel, kerosene and engine oil for decades! Let me shock you: we are the largest Oil-rig producers in the world! The World Bank ranks us as the easiest place to do business in the world.

I’m blushing, even in death! Let me explain how we attained these feats. We are no magicians. We are no angels. We are human beings like you, dear Nigerian leaders. The first thing we recognized is that quality leadership is non-negotiable.

I understand that ordinary Nigerians get all the blame for Nigeria’s problems under the pretext that if the followers are bad, then leaders will be bad. I disagree.

If the leaders are good, the followers will be good. The leaders take the critical decisions and show direction. That is why they are called leaders. It is the dog that should be wagging the tail, not the tail wagging the dog. Don’t blame passengers for bad driving. Countries are transformed by good leadership.

Why does a country need competent and exemplary leaders? Development starts from visioning. No country develops by accident or co-incidence. Development is planned. The leader, who must understand the critical issues, puts together a team, shares his vision with them, assigns them responsibilities and leads them from the front. That is where it starts.

It is when you have a vision of society that you will know that education is key, electricity is key, health is key, infrastructure is non-negotiable. It is when you have this vision that you know where to direct your energy and resources. You know the kind of people to put in charge of key ministries and agencies. Furthermore, leaders must not be obsessed with instant gratification and personal comfort.

That is one of the biggest problems you, Nigerian leaders, have. You are too obsessed with the perks of office that you have forgotten why you were elected in the first instance. I understand that you have a presidential fleet of the latest jets in town, and that your governors also own jets or fly in chattered jets.

What a waste. I will share a story with you, which you can read in my book, ‘From Third World to First’. The story is on pages 363-364 and it had to do my trip to Ottawa, Canada, for the Commonwealth meeting in 1973. The Bangladeshi Prime Minister, Sheikh Mujibur Rahman, arrived in style in his own aircraft. When I landed, I saw a parked Boeing 707 with “Bangladesh” emblazoned on it.

When I left, it was still standing on the same spot, idle for eight days, getting obsolescent without earning anything. As I left the hotel for the airport, two huge vans were being loaded with packages for the Bangladeshi aircraft. At the conference, Mujibur Rahman had made a pitch for aid to his country. Any Public

Relations firm would have advised him not to leave his special aircraft standing for eight whole days on the parking apron. You want aid but you are showing opulence to the world. Presidents of Kenya and Nigeria also arrived in jets.

I wondered why they did not set out to impress the world that they were poor and in dire need of assistance. Our permanent representative at the UN explained that the poorer the country, the bigger the Cadillacs they hired for their leaders.

So I made a virtue of arriving by ordinary commercial aircraft and thus helped preserve Singapore’s Third World status for many years. However, by the mid-1990s, the World Bank refused to heed our pleas not to reclassify us as a ‘High Income Developing Country’, giving no Brownie points for my frugal travel habits. We lost all the concessions that were given to developing countries.

Dear Nigerian leaders, I understand that you are very, very religious. The Muslims among you pray five times day, go for lesser hajj so often, fast during Ramadan and mention the name of God as punctuation for every word and every sentence.

The Christians among you are always speaking in tongues or eating communion, paying fat tithes and heavy offerings and holding prayer sessions at home every morning. Yet, I am told you loot your state treasury without compassion or compunction, inflate contracts recklessly, operate killer squads, and watch, without conscience, as your citizens struggle without clean water and good hospitals.

Two of my younger brothers, Freddy Lee and Lee Suan Yew, are members of the Anglican and Methodist churches respectively. I was not a churchgoer. Don’t misunderstand me: I am not saying you should not believe in God. But I only wonder: how can you say you believe in God and fail so woefully in what the Holy Bible and Holy Qu’ran teach about loving your neighbour, caring for the needy and showing responsibility as a leader?

I cannot understand it. You guys never cease to amaze me with how you can conveniently combine religion with greed. On a final note, I appreciate that you are mourning my death and describing me as great. Thank you very much. But I want you to know that you too can become great by putting the welfare of your citizens above your personal comfort. Nigeria too can produce a Lee Kuan Yew. I go to my grave a happy man. Ask yourself: will you go to yours fulfilled? Adieu!

Lee Kuan Yew, often referred to by his initials, LKY, was a Singaporean Statesman and Lawyer who served as Prime Minister of Singapore from 1959 to 1990. As one of the founding members of the People’s Action Party, Lee is recognised as the nation’s founding father, credited with rapidly transitioning the country from a ‘developing third world country into a developed first world country within a single generation’ under his leadership.

Lee died of pneumonia on 23 March 2015, aged 91. In a week of national mourning, about 1.7 million Singaporean residents as well as world leaders paid tribute to him at his lying-in-state at Singapore’s Parliament House and at community tribute sites around the country. He died in 2015 and yet, his observations about my dear country Nigeria, still aptly describes our situation, even 6 years after!!