Anything that has a positive must have a negative. Every word has an opposite. Of recent I deliberated on “Catch them young.” The opposite of catch is leave. The opposite of young is old. A certain funny lady whose nickname is ‘The Young’ was asked the future of her young appearance.

She stated categorically that the answer is Ever Young. Everybody, including her proud self, laughed it off. But I raised an objection and said, “Lady, your answer is not correct because nothing remains ever young.” She insisted, “Your objection is hereby declared null and void by me.” There was another round of emotional laughter.

The opposite of laughter is seriousness. This reminds me of a spiritual exercise in which I was the coordinator and moderator. It was during the monthly spiritual recollection of priests in my region. My Bishop was present. After the presenter gave a marathon spiritual talk, I gallantly stood up to moderate and appreciate him. During the moderation, I utilized words comically to drive home my points. 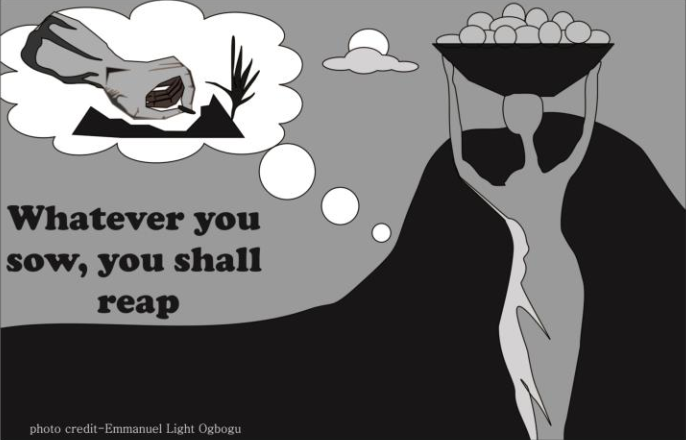 I am serious.” Laughter took hold of him equally as he sat down to enjoy my comical moderation. There is time for seriousness and time for laughter. Laughing is a healthy ingredient of human life. The more you laugh, the more you live longer. However, you must laugh sensibly. If you laugh anyhow, then you are not far from the kingdom of madness.

Today, I am moderating between catch and leave; young and old. I won’t tell you that I wrote this article at my sick bed. I was sick in the body but I refused to be sick in the mind as well. In other words, I was bodily sick but mentally healthy. The worst sickness is bodily and mental sickness combined.

During the writing, I was sweating like a local pig due to the day’s heavy sunshine and hot weather. The ceiling fan was swinging steadily. Unfortunately it produced artificial hot air. Luckily, God looked at me through the window of my private room and saw me battling with sickness and extreme heat. As the Alpha and Omega, he commanded fresh and soothing air to flow all over my soaked body.

Immediately I abandoned everything I was doing and knelt down beside my bed and sang praises to God for his benevolence to me, unworthy as I am. When the Angels started praising God, I shut up my sinful mouth. Then I resumed my writing. There and then, I concluded that there is an ontological difference between nature and artificiality, between fan and fresh air.

One may say that I am beating about the bush so far. No, that is not to be. Verily I am just clearing the ground for genuine cultivation. Whatever goes up must surely come down. My people say that if the ear refuses to hear words of advice, it must surely surrender when the head is cut off.

A child that does not allow its mother to sleep will not sleep as well.  When someone carelessly cuts a yam tuber by standing and digging, he must sit down to dig out the remnant inside the soil. When a child proves stubborn during childhood, then it must suffer the consequences during adulthood. Those children who stubbornly refuse to be caught young will regret at old age. The worst type of cry is ‘had I known.’

An English adage says, “The child is the father of the man.” This sounds tautological. But it is not. No one remains a child forever. Even the dwarfs who look facially childlike are internally adults. So far there is life, old age must come.

Sometime ago, I came across a stubborn boy who was abusing and shouting at his biological father in these ugly words: “Foolish man, go and die so that I can breathe in this house!” I stopped and watched the scenario sorrowfully. The boy was at the same time throwing stones at his father.

The poor father ran and took cover behind the trunk of a giant mango tree. From there he shouted with tears, “I really regret bringing you into this world. You are abusing and throwing stones at me so that I may die quicker. It will not augur well with you. I swear.

You will live to regret your evil actions.” The father was barred from entering into the house he built with the sweat of his brow for three consecutive days by his only son. Later, the man developed heat attack and died after battling with it for six months.

The stupid boy jubilated at the death of his father. As the only son, he took possession of his late father’s property. His mother also died two years later as a result of cancer of the brain.  The young man and only son automatically became an orphan. He erected a sign-post beside the gate on which was it was boldly inscribed: “Welcome to Big Boy’s Orphanage Home.” Unfortunately, he married a nagging woman who did not give him any breathing space.

In addition, they lived for twenty years without any child. After all efforts to get a child of his own became futile, he committed suicide by hanging on the branch of the giant mango tree where his late father took cover when his son was abusing and stoning his father. Indeed, the evil that men do live with them and after them.

My dear children, listen to the words of advice from your parents, teachers, guardians, masters, pastors and elders. Personally, I am half child and half adult. I am half a child because my mother is still alive and I listen to her. I am old because Obi is no longer a boy. Obi must grow.

On my own side, Obi is now a man. Physically, I am getting old. Internally it is the same Obi who was a boy and now a man. If he was a stubborn boy, then his stubbornness follows him into old age. Let us struggle from childhood to inculcate discipline into our system so that we may be happy at old age.

What is happening these days in the lives of the future hopes of tomorrow is an eye-saw. Some of our children right from the cradle are evil minded. Some belong to secret cults. Even today some children under 18 years engage in robbery, kidnapping and terrorism. Some primary School pupils are being used by kidnappers to lure unsuspecting children into kidnappers’ den.

Are you aware that some of our kids smoke the current dangerous drug known as ‘mkpuru-mmiri’? Some evil-minded children and boys slaughter their parents in order to acquire quick wealth. Such bloody wealth does not last long before nemesis sets in. No wonder we witness often when a young man abandons his flashy jeep at the middle of the road, takes off his entire clothes and starts to shout, “Give me my share!” Madness has already begun.

Such sudden madness has to do with human ritual. Not long ago, a university student invited his biological mother to his rented apartment. The innocent mother bought assorted fruits for her son. At her arrival, the son who has turned into something else, started to stab his mother with a knife. Luckily the mother escaped with blood flowing all over her body. Such a son might have entered his mother’s womb from the underworld. A good child enters the womb from the world above.

The criminal minded son’s study table has turned into human abattoir. He is guilty of attempted murder. His fate is either life imprisonment or death by hanging. Beware of Yahoo boys now wandering about here and there. They are specialized in human sacrifice to make quick money. They spare nobody. Many girlfriends have fallen victims of such human rituals from the hands of their boyfriends.

“A dog that ignores the hunter’s whistle is bound to get lost.”