The ambition of the presidential candidate of Labour Party (LP), Peter Obi, to become the next president of Nigeria received a major boost last weekend as hordes of traders in all the major markets in Lagos State endorsed his candidacy.

Speaking at a press conference, the coordinator of the group, Chief Ikechukwu Obiora, explained that as a support group, they would champion the emancipation of Nigeria and creation of a new society based on equity, justice and decency.

According to him, their membership cut across all strata of society, including captains of industries, business moguls, traders, artisans and public servants in different industries in Lagos State and environs. 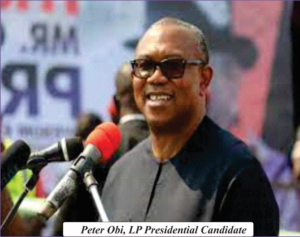 Speaking further, Obiora said the group was born out of the desire to align themselves with the progressive forces, particularly the Labour Party, to rescue and take back Nigeria from what he described as the deadly grip of mercantile politicians and corrupt leaders who had held the country and the people hostage over the decades and return it to greatness under the leadership of Peter Obi as president and Yusuf Datti-Ahmed as vice president of Nigeria.

He said that Nigeria was sick and that the people were tired of high level insecurity, extreme poverty, large scale unemployment, exorbitant cost of food items, prohibitive transport fares and many other negative issues bedeviling the country and giving the citizens sleepless nights.

His words, ‘There is need to change direction and for the people to take direct leadership of such direction and dictate the kind of change they want as against the one desired by politicians to elect leaders who have integrity, competence and capacity; leaders who have concern for the downtrodden and weak among us so as to make the country all-inclusive and forward-marching. A vote for Obi-Datti is a vote for a better future and a better secured and prosperous Nigeria which will restore our dignity as a people and pride in our country.’

In his contribution, the legal adviser of the group, Fabian Onwughalu, said Nigeria had almost become a failed state, as it was no longer safe to travel from one part of the country to another as a result of insecurity.

Onwughalu, a former president of Ohanaeze Ndigbo, Lagos State, disclosed that he used to be a card carrying member of the All Progress Congress (APC), but because of unfulfilled promises and the way the country was going, he had to join Obi-Datti Support Group for a better and more prosperous Nigeria.