The Catholic Archbishop of Lagos, Most Rev. Alfred Adewale Matins was on Tuesday afternoon locked inside his residence by the facility manager of the Lagos City Hall.

The Archbishop’s residence shares the same access gate with the Lagos City Hall, which is owned by the Lagos State Government. 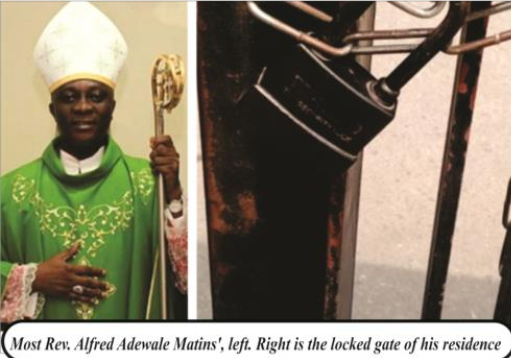 According to reports from the Catholic Archdiocese, the facility manager stormed the Chancery and residence of the Archbishop informing the staff of orders from the Lagos State Government to lock up the gate of the facility.

Eyewitnesses explained that the facility manager, who was visibly in a rage, refused to listen to pleas from workers around, saying he was acting under instructions to lock up the gate of the facility and also report for a meeting at Alausa, Ikeja, where the Governor’s office is situated.

He thereafter locked the gate with the Archbishop still in the residence and left.

Meanwhile, when contacted, another source who spoke on condition of anonymity said the matter is being resolved.