The gas explosion that took place at Ojekunle Street in the Ladipo area of Mushin, Lagos last Tuesday has left five people dead and several others wounded, says the South West Coordinator of the National Emergency Management Agency (NEMA).

According to him, one female and three male bodies had as at then been recovered, while a 10-year old boy who was trapped in the explosion died on the way to the hospital.

A statement from the Lagos State Emergency Management Agency (LASEMA) clarified that the cause of the Lagos gas explosion was that gas ignited and exploded in an open land with shanties and shops where gas cylinders were stacked. 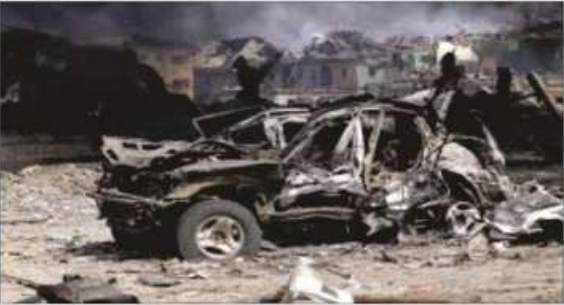 The Director-General of the agency, Olufemi Oke-Osanyintolu, appealed to residents of the area to be calm as the situation was already under control.

For his part, the Lagos State Commissioner of Police, Hakeem Odumosu, informed newsmen that the gas explosion was caused by a phone call. According to him, one of the casualties was making a telephone call close to one of the gas cylinders and it triggered the explosion.

‘It is completely avoidable; human negligence led to it. From what I have seen there, from what I have heard, the thing blew off. Someone was trying to refill the gas cylinder, as well as making a call,’ Mr Odumosu said.

Another eyewitness who introduced himself Lekan, said he was at home when the incident happened but he thought it was the power line.

His words, ‘I was at home around 8 a.m. when I heard the explosion, the second street to this place. We thought it was the power line. A body part, a hand, flew to our street. Also when I got here, I started seeing different body parts on the floor.’

Not less than 15 vehicles were destroyed in the explosion, as well as houses in the area.

The workshop where the explosion took place is said to be a haven for mechanics, panel beaters, gas retailers and some other traders. A typical place where a beehive of activities go on constantly.

Another version had it that a gas retailer, simply called Sodiq, was dispensing gas from a cylinder to another customer. At the same time, a woman identified as Mama Emma was frying puff-puff around 7:30 a.m. which triggered the explosion.

It was a sorry sight as Sodiq, the customer, Mama Emma and two others were burnt to death.

Traders at the scene of the explosion expressed their pain at the manner in which the gas retailer died, saying that he did not deserve to die in such a gruesome manner.

Some vehicles were buried in the rubble from the blast, while sheds used by mechanics were uprooted and littered all over the place.

One of the mechanics whose workshop was at the place where the explosion took place said his Toyota Highlander and four other cars belonging to his customers were also affected; even as he expressed gratitude to God for sparing his life.

‘I thank God for the preservation of my life. I had a vehicle in my workshop when the explosion happened and four others belonging to my customers. The vehicles were for repairs. I have informed their owners and they asked me to send photos of the damage,’ he said.

The mechanic noted that one of his apprentices was severely injured, but had been rushed to a nearby hospital.