I am compelled to address the issue of indecent dressing because it has become a norm in our society that looks like it has come to stay and stay forever. Sometimes, I wonder what is so difficult about dressing to be decent? How can a girl or a woman dress up and leave her home, looking like somebody who’s about to compete with the regular mad person on the street?

Sometimes, I actually see such things and look away because it’s actually becoming a part of our society of today, but just yesterday, I saw a very bad case of indecent dressing that got me thinking so much that I had to write about it.

You know, ever since I broke my wrist, I have not been able to drive due to the complications I had. So I come to work in a public transport and go home the same way. Yesterday evening, I had a very busy day at the office and was really tired. At close of work, I got to the Star Sunny Park at Aroma and boarded a bus to Onitsha. I quietly sat on the second row, by the window, intending to sleep through the journey.

That was how exhausted I was. Shortly after, a young lady approached our bus and I have never been shocked. She was wearing a blouse that was open in the chest area. Then that open space on her chest area was covered with a net. Her breasts were showing through the net because she was not wearing a bra. I mean the entire breast area was open except for the nipples but her entire breasts were showing through the net.

It was the most embarrassing thing to witness and believe me all eyes were on her. As if that was not enough, the blouse was hanging in such a way that you will see her belly button. Then she wore this very loose leggings that made all her body shake as she walked. You know, for someone who was quite large, it was the most inappropriate thing to wear, because with every movement, you could see her entire body contour.

I was so transfixed and openmouthed looking at this young girl and wondering what was going on in her mind when she dressed up to leave her house or wherever she came from. Was there anybody when she left the house? Did they ask her where she was going to? Did they know she was leaving Awka to Onitsha or wherever else she planned going to? I was shocked. Well, she gingerly approached the bus and I took an even closer look.

She was really beautiful. Of course, when she was approaching the bus, some occupants of the bus were already murmuring about what she was putting on. So she entered the bus and sat right in front of me, on the seat directly behind the driver. When she tried sitting down, what we saw was a slap on our sensibilities because the leggings she was wearing isn’t the type that has tight rubber holding the waist. It slid a little as she bent and the upper part of her buttocks got exposed. She casually pulled it up and sat on her seat.

Every passenger that grumbled about her indecent dressing became silent. Nobody uttered a word. We all paid our fares and the bus moved. She eventually embarked at the Nkwelle junction, and you can imagine the reaction of the occupants of our bus. A particular man was very angry at the young lady’s dressing. Both men and women in the bus continued to discuss the young girl until we got to our different destinations. 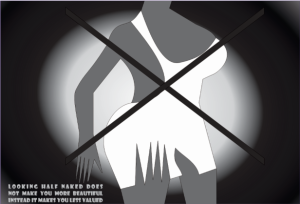 The man who was particularly very angry blamed the driver and said that if he was the one behind the steering wheel, he would not allow anybody dressed that indecently to board his bus. Most people supported him, others argued that as far as she had paid for her bus fare, nobody had the right to disturb her peace. The driver on his own part argued that it was none of his business how any passenger was dressed because he was just a driver employed by Star Sunny Motors, doing his job for which he was employed.

He went ahead to explain that most times, their management queried them for one complaint or the other that was given by passengers. His argument remained that he was not ready to lose his job on account of any irresponsible young girl. He had a family to take care of and that was what he intended to do without stepping on anybody’s toes. A woman in the bus asked him how he would feel if it was his daughter that was dressed in that manner. She wanted to know if he would keep quiet and allow her parade herself like that in public just because he wanted to keep his job.

The driver retorted that his daughter would never dress like that, but that if for any reason any of his daughters dressed in that manner, then they deserved any reaction they would get from people around them. He said his wife was a very decent woman and no daughter of theirs would ever dress in that manner because girls always took after their mothers.

The arguments went back and forth as we journeyed on. At a point I had to give my own contribution to the argument. First of all I told them that I did not blame the driver because like he rightly said, he was there to do a job assigned to him and make a living from it. Every driver in the park had the duty of loading their bus as quickly as they could, take off, drop the passengers and reload and head back again.

The target is to make as many trips as possible. I also reminded them that they themselves also had the right to counsel the young girl as well, if they so pleased. Just as the driver was being blamed, they also had every opportunity to talk to her as well, but they didn’t. Our arguments went back and forth. As each passenger alighted at their respective destinations, the arguments raged on.

I told them that the driver made a very valid statement when he said his daughters would never be indecently dressed because his wife never dressed that way and children took after their mothers. I remembered the case of a young girl in my parish who was fond of wearing very short dresses and would love to stay in the front row when our church was still an out-station. Mass was always on the street and so you could see everybody from every angle the person sat.

Every Sunday, I would see this girl comfortably seated in the front row with a short dress and then noticed that she would use a handkerchief to cover her legs. What shocked me all the time was that her mother always sat beside her. It was so worrisome because she was always wearing those really short dresses that clung to her body. Each time she went to receive the Holy Communion, you would see her pulling down her dress because it was really short.

On this particular day, after Mass, I was exchanging pleasantries with two members of the CWO and the young girl walked past us and respectfully greeted us. We answered to her greeting and shortly after, her mother followed suit. We also exchanged pleasantries as she rushed to meet up with her daughter. One of the women told me that I should please call the girl and talk to her.

I have six daughters I am taking care of and will rather channel my energy to my daughters or young girls who have nobody mentoring them. The woman then told me that she would take it upon herself to advise the young girl. Well, she did and a few days after that, the young girl’s mother visited her and gave her the tongue lashing of her life, threatening to beat her up if she never stopped her daughter on the road next time to tell her ‘rubbish’.

The woman had to look for my number and gave me a call, almost in tears and feeling so humiliated. I asked her the problem and she told me that she had never been so insulted by any woman, the way the mother of that young girl assaulted her in her home. What hurt her most was that her own husband seriously blamed her for not minding her business and warned her never to try such again.

So I told her that I have devoted a lot of my time in mentoring young girls. However, I do that with young girls that ask to be mentored. I reminded her that I warned her against talking to that young girl because her mother was always with her which meant she was in support of what her daughter wore to church. I’m sure she learnt her lesson.

Please, my appeal goes to every woman out there. Our job is to raise these girls into decent future wives of young men, with whom they would build their own families. Most times, you see,  young girls in the church wearing clothes that are better worn to parties. It is wrong. It is very wrong for us to sit down in our homes and watch our own daughters dress so indecently to worship in the house of God or to go to school or to visit friends or even to go to the marketplace to buy things for us. It is wrong.

How are we even dressed, as mothers whose children look up to? I always tell not only my daughters, but also, the young girls that I mentor that it is possible to dress beautifully and decently at the same time. It is a mantra in my home. You can be decent and beautiful at the same time. Looking half naked does not make you more beautiful. It never does.

And so, I plead with everyone reading this: There are many problems in our lives today. Let’s not add more to it. Let’s be more decent in order to be more beautiful. It works for me! It can work for you!! The world deserves to be filled with decency and beauty, just like our Lord God created it. We’ve got what it takes! Let our new mantra be DECENCY and BEAUTY! Yeahhhhh!! Daalu nu!!!