Labour Crisis: We Have Only One Recognized NLC Leadership in Anambra -Stakeholders

…Pass Vote of Confidence on Nwafor

Former chairmen of the Nigeria Labour Congress (NLC), Anambra State Chapter and other relevant stakeholders have passed a vote of confidence on Sir Humphrey Nwafor led NLC leadership in Anambra State, describing it as authentic and constitutional.

The past Labour leaders and critical stakeholders unanimously endorsed Nwafor and his team, even as they demanded that the Ayuba Wahab-led national leadership should support the election of Humphrey Nwafor against the chairperson of the Medical and Health Workers Union of Nigeria (MHWUN), Mrs. Chinwe Orizu.

They said the intervention was hinged on the fact that Nwafor, who doubles as state chairman of the National Association of Staff Union (NASU), was duly elected at a meeting in NLC’s State Secretariat, Awka.

The past NLC chairmen who intervened and backed Nwafor, including comrades Godwin Ibekwe, Anthony Ugozor and Patrick Obianyo, noted that Nwafor’s emergence followed provisions of the NLC, particularly Article 11(3) 8, which, they said, authorized the State Executive Committee (SEC) to fill vacant positions in acting capacity. 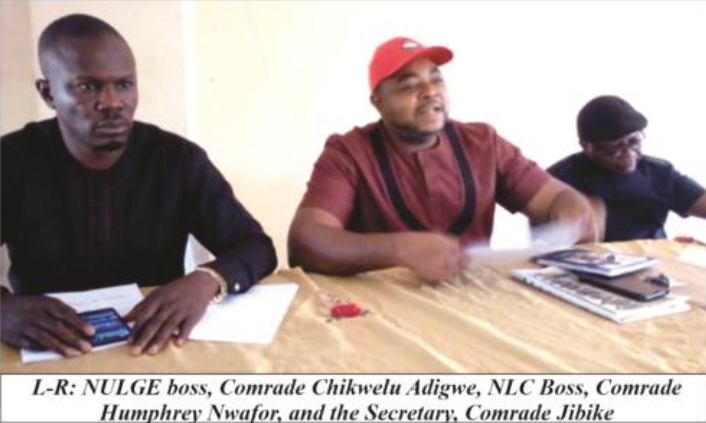 According to them, Nwafor fulfilled the provisions of Article 10(4) 6, which governed his nomination and unanimous election as the NLC chairman in the state to complete the tenure of his predecessor, Jerry Nnubia, who vacated his position based on his retirement from service.

They expressed gratitude that the state government had reviewed the process and application of constitutional provision in the election and accorded Nwafor the right to attend state functions, including the Armed Forces Remembrance Day Celebration; inauguration of Awka Township Stadium and the Joint Public Service Negotiating Council (JNC), among others.

While warning that the lingering crisis could affect smooth interface with the state government on labour matters in the state, they pledged to reach out to the Wabba-led NLC for a lasting solution to what they described as a distraction.

Speaking, the JNC Chairman in the state, Mrs. Edith Onwuka, argued that the state government had not been paying the N30, 000 minimum wage; was owing leave allowance of workers, especially of the National Union of Local Government Employees (NULGE); as well as pensions and gratuities, adding that the organised labour should be focused and united to present the demands to the state government.

She however appreciated what she described as the timely intervention of past leaders, stressing that there was need to unite the body ahead of the swearing in of the Governor-Elect, Prof. Charles Soludo.

Contributing, the Chairman of NULGE in the state, Chikwelu Adigwe, solicited the support of the workforce for Nwafor’s leadership, having been elected within the ambit of constitutional provisions.

He accused Nnubia of being the brain behind the discord, stressing that a leader who retired from service should quit his position as stipulated in the Constitution.

Earlier, Nwafor assured that he would not relent in serving the greater interest of the workers having emerged constitutionally.