KUJE JAIL BREAK: THE CRY OF A WITCH AND THE DEATH OF A CHILD

Since 2010, Nigeria has been bedevilled with incessant terrorist attacks to this day. Over the years this cancer threatening the life of the country has metastasized into three variants to reach the country’s nooks and crannies: from murderous Boko Haram to butcher Fulani Herdsmen to ferocious Islamic State in West Africa (ISWAP) and to marauding Bandits and Kidnappers. In all they kill, main, pillage, burn and extort, and leave in their wake: sorrow, tears and blood.

Apart from treasonable felonies associated with terrorism by accomplices in government, the military and the people, insecurity in Nigeria is now a lucrative business – a huge mine. Some even opined that a Banditry Sector of the Economy should be recognized and its contribution to the Gross Domestic Product (GDP) measured. The government wittingly and unwittingly channels its scarce resources to capital offenders in the guise of fighting insecurity.

The terrorists themselves have designed strategies to hold the government and the people to ransom. There are hundreds of people still languishing in terrorists’ camps across the country since the infamous and controversial abduction of 276 Chibok girls (57 escaped by jumping off trucks and over 100 of the remaining girls were freed after government negotiations) on 14th April 2014. Against known worldwide practice, terrorists are negotiated with in Nigeria.

The witch cried when the terrorists, holding about 62 Nigerians mostly the VIP passengers of the bombed Kaduna-bound train hostage since March 28, threatened to kill them. They demanded the release of their commanders in Nigeria’s jails and issued an ultimatum with dire consequences if they were bluffed. Meanwhile, they had been releasing those who met their N100m ransom per abductee, including the Managing Director of Bank of Agriculture. They also released a pregnant woman on “health grounds.” The N100m ransom apparently gained momentum after the Presidential aspirants of the All Progressives Congress APC were asked to pay N100m for their nomination forms.

We wondered how the government would deal with this threat without succumbing to the pressure being mounted by the families and friends of the victims. After all many families and friends had paid ransoms running into billions of Naira to these criminals without end. The families of kidnapped victims had formed a pressure group to persuade the government to acquiesce to the demands of the callous and bloodthirsty abductors, who had killed 8 of their fellow passengers on that fateful day. The families and groups would always run to government for help at first but will still be the ones to pay the ransom to secure the release of their loved ones, if they are lucky to have them alive. 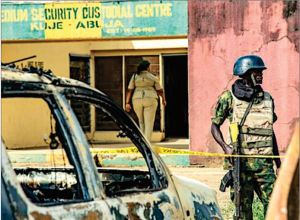 So, it began like a fable when the news of terrorist attack on Kuje Medium Custodial Centre began to filter in on the net early morning of July 6. People dismissed it with a wave of hand because of its incredible story that a ragtag army of terrorists in their dozens besieged the Abuja fortress imprisoning both the innocent and guilty, bombed it and released over 600 inmates including 64 of their members, mainly commanders. With this daredevilry breakout, it appeared that the cry of the witch a while ago had resulted in the death of the child.

While the Kuje was on the verge of attack, the joint task force comprising police, army and civil defence were all over Abuja metropolis clamping down on Parks and Gardens in an untenable bid to enforce the ban on recreational spots being open to the public beyond 7pm. Residents of Abuja enjoy nightlife and a major part of it are spent in those “gardens” till the wee hours of the morning. But the authorities said they were enforcing a court order of 2002.

Abuja residents like other Nigerians are experiencing untold hardships because of the comatose economy enabled by a clueless, incompetent and lacklustre government. And a chunk of these downtrodden, struggling Nigerians go to these recreational grounds to unwind. The untold story of the clampdown is that the government was likely preventing an imminent attack from security reports through the backdoor. These spots are soft targets.

Besides, military and para-military formations and an army battalion clustered around Nnamdi Azikiwe International Airport are about a 30-minute drive to Kuje Custodial Centre from the Airport. No one heard of them. Kuje is about 1-hour drive to and fro Aso Villa – the nation’s safest haven. But no security operatives came to confront the inglorious bastards who besieged the prison for a record-breaking two hours and forty five minutes.

Perhaps the joint task force had retired for the day after their outing, likened to chasing of rats while the house burns. Or is it about alcohol and opium consumed in public against some beliefs? Recall that earlier some night pubs had been closed down and another one in Utako District bulldozed down for some purported contraventions of the land use laws.

It’s reported that when the outlaws took over the Kuje Jail, they interacted with the inmates: prepared their 64 members for the escape; burnt down the prisons records; took some money from the vault; doled out some cash to fleeing ones; and stopped a mutiny of acrimonious and vengeful inmates who looked forward for an opportunity for a showdown to settle scores. (An affluent inmate was nearly killed by his fellow inmate who doubled as his handyman and cook but the terrorists insisted their mission wasn’t murder.)

Reportedly there was a stampede that night: some inmates were injured and a few died as a result. Many had their hearts in their mouths as the war raged and a few died from stray bullets. Not all the security personnel were lucky to escape alive. If only one died as claimed, then the Officers must have be informed earlier. Or was it only one man, the dead Civil Defence Officer, who defended the prison? It was alleged that the military team guarding the correctional centre was recently changed after many months. If true, why the change?

Not all the over 600 inmates fleeing the prison that night had a safe escape. Some were gunned down and apprehended by the vigilantes on a hunt. Some, not accustomed with the terrain, got stuck and voluntarily returned. Some days later, some of those who fled knowing that they’d still return saw a golden opportunity and used the forced moratorium to attend to some personal matters – and they did return. (Perhaps, because they are aware, to a large extent, that one can run but cannot hide.) However, most of the escapees vanished into thin air. Would one be willing to return back to a supposedly fortress which couldn’t guarantee the safety of its occupants?

Unlike other 8 prison breaks in the life of this administration, the FCT prison witnessed a coterie of VIP visitors after the attacks: Inspector General of Police, some ministers, some big politicians, some senior government officials, some heads of Security agencies and the President.  Kuje prison is a 15-minute uninterrupted drive to or fro the interchange on Umar Musa Yar’dua Way, also known as Airport Road. The President on his way to Senegal made a detour for an on-the-spot assessment before jetting off for a more important job in a foreign land.

There are permutations that all the bad boys – Boko Haram, ISWAP, Fulani Herdsmen and other bandits – have bandied together already. Because it’s reported that they spoke Hausa, Fulfide and some foreign (Chadian) tongues. And coupled with the fact that they attacked a “fortified” facility in FCT harbouring the headquarters of all security agencies should be a cause for worry.

By July 11, after the daring attacks, seven of the abducted persons of the bombed train incident regained their freedom. The family said they paid N800m (a Pakistani among them paid double of the ransom) to the terrorists to secure their release. Three more were freed on 25th July after paying the ransom by their families, following a disturbing video of the victims being brutalized by their captors. Five hostages were freed on August 2. More releases may follow in days ahead.

Meanwhile, Abuja is under threat after the terrorists tested the microphone with the Kuje brutal attacks. They had made successful kidnaps on Abaji-Lokoja expressway and the City’s suburbs, engaged the military on a shoot-out for hours near Zuma Rock at the fringe of the City, killed two officers and 6 soldiers of the Guards Brigade at Bwari, threatened to capture the President and Kaduna State Governor, stirred a rubber-stamp National Assembly to issue a 6-week ultimatum to the President to deal with the hydra-headed insecurity or face removal on their return from recess, forced public schools and private universities to close prematurely and caused Security Agencies and foreign organizations to issue advisory and  cautionary notices.

Now, terrorists are expanding frontiers while our safe locations shrink.

Ucheagu, a political activist and analyst, wrote from Abuja.