As the tenure of Brig. Gen Tony Okeke came to an end in December 2021, the Ancient Noble Knights of St John International Awka and Ekwulobia Dioceses on Saturday, January 22, 2022, inaugurated a new team of officers to man the affairs of the Knighthood for the next four years.

The inauguration which was held at the KSJI Hall at St Patrick’s Cathedral Awka, came after the Grand Commandery held their elections in December 2021 to elect their leaders.

Beginning with a thanksgiving Mass that was officiated by the Spiritual Director of the Commandery, Rev. Fr Evaristus Ifeanacho, the homilist, Rev Fr Alexander Eze Ma, referring to the Book of Acts of Apostles, where the Apostles were called Christians because they acted like Christ, charged the noble knights and their ladies to toe the same path as they discharged their duties to the Knighthood, adding that it was in their work for Christ that they could be called Christians. 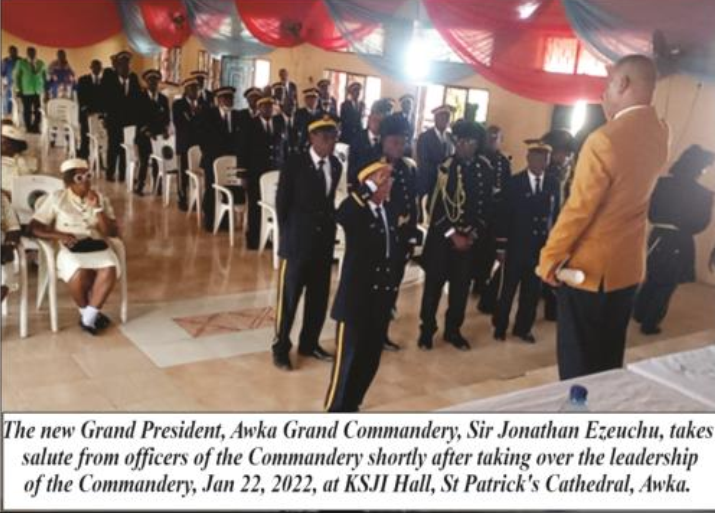 The priest who appreciated the efforts of the outgoing grand commander and his team, also charged the new ones to be committed to their duties so as to maintain the pace in the growth of the Commandery, stating that there was need to do more.

Fr Eze Ma cautioned that being a Grand Commander or Knight did not insinuate having money but that the first reason of being a Knight was for the salvation of souls.

His words, ‘Most people think knighthood is for those who have money. This is not true. The first reason of being Knight is “salus animarum”, that is for the salvation of soul.’

He further called on the Knights and their ladies to reconcile among themselves in achieving all that was necessary to make Christianity, faith and evangelism a priority.

Speaking with Fides Media after the Mass, the out-gone Grand President, Brig. Gen Okeke, expressed satisfaction on how the Lord had led them in the last four years of their intense leadership. This was even as he added that they started and ended well because God was in their midst all of the time. Sir Okeke who expressed readiness to support the new executive, also expressed the hope that the new leadership would do well in piloting the affairs of the Commandery.

The new Grand President, Noble Sir Jonathan Ezeuchu, said his new office came in with joy. Noting the trust that had been entrusted to him, Sir Ezeuchu urged them not to betray the trust that had been given to him, just as he thanked the outgone officers for their work done, adding that they would be consolidating on the already existing projects, as well as work on the spiritual growth of the Commandery.

For her part, the new Grand President, Awka Grand Laux, Lady Dr Loyce Onyeali, expressed optimism that the new officers would dwell more on their five terms of references which she termed as: charity, spirituality, discipline, fraternity and restoration. Adding that the term of reference would be improved under their watch in the Commandery, Lady Onyeali also noted that the importance of women in the knighthood might not have been quantified.

The out-gone executive members, among many of their achievements, started the erection of the Legacy Centre at St Patrick’s Cathedral, Awka.

Fides gathered that KSJI, established in 1048 AD, is a lay apostolic organization primarily set up in defence of the Church and in bearing witness to Christ through their lives and activities.