As part of efforts to propagate the anti-corruption message of the Economic and Financial Crimes Commission, EFCC, member of the National Youth Service Corps, NYSC Anti-corruption CDS group in Karu Local Government Area of Nasarawa state, on Friday, October 21, 2022, unveiled a signpost with anti-graft messages.

The signpost which is strategically located at the busy NYSC Local Government Secretariat Express Pedestrian pavement by the Karu Local Government junction, has the following inscriptions: “See something, Say something and Do the right thing: Act against Corruption . It also has artworks depicting the perils of indulging in cybercrimes and corrupt practices.

The project was unveiled by CE Ayo Olowonihi, Commandant EFCC Academy, Karu. Olowohini who was represented by the Assistant Director, Media of the Academy, Chidimma Amanambu, congratulated the corps members on the laudable project which he described as a key campaign tool. “This signpost is a key campaign tool for the neighbourhood, for passers-by… 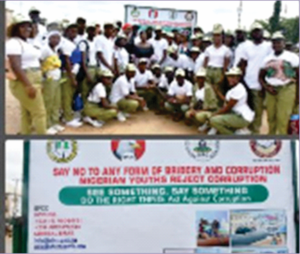 we thank the NYSC Batch ‘C’ Anti-Corruption CDS group; we believe that in you we have anti-corruption foot soldiers”, he said. He further charged them to continue engage the youths to shun cybercrime.

Speaking on the initiative, the President of the NYSC 2021/2022 Batch-C Anticorruption CDS group, Samuel Audu Moses, said the signpost project was a way to reach out to the society at large on the perils of corruption. “People at their own time can go through the information on the post and contact those that they are supposed to contact to report economic and financial crimes”, he said.

He added that the project was inspired by the sensitization visit of the EFCC and ICPC to the CDS group which led to a better understanding of the workings of the Commission and the need for them to key in.

Nnaji Stella the NYSC Local Government Inspector, LGI, Karu, commended the Corps members and charged them to personalize the corruption fight, “if you are not corrupt you’ll be able to tell people not to do this, but if you are corrupt you’ll not be able to stand and say this is this…” she added.

The project was funded through personal financial sacrifices of the corps members.