There is now no denial that there is a huge crack in the leadership of the secessionist group, Indigenous People of Biafra (IPOB).

Mazi Nnamdi Kanu, the founder and leader of the group and his followers have openly declared a battle against Simon Ekpa, a Finland based former soldier, who is said to hail from Ebonyi State, with the aim of wresting the group from him.

Also, there have been allegations that the violence being experienced in the South East states is orchestrated by Ekpa and members of his group.

Simon Ekpa, a former ally of Mazi Nnamdi Kanu, came into limelight about three years ago. Before then, the ex-Finnish soldier had been identified as an athlete who won a few laurels for Nigeria before migrating overseas.

His identification with Kanu however gave him the recognition he sought. Using the name of IPOB and Kanu, Ekpa constantly described himself in broadcast messages as an unapologetic disciple of Nnamdi Kanu. Those who know Ekpa say he supported Kanu to the point of becoming a trusted ally of his, and even held separate broadcast messages away from Kanu’s.

However, the arrest of Kanu in Kenya last year proved a turning point for Ekpa, who started assuming the group’s leadership, even to the point of calling for fund raising and seeking to control the military wing of IPOB, known as Eastern Security Network (ESN). Attempts by the Directorate of State (DOS) of IPOB, which was running the group in the absence of Kanu, to stop him yielded no fruits.

Ekpa rebuffed the DOS, claiming that IPOB was on auto pilot and not controlled by anyone, and as such, he would not submit to the DOS. A source who claimed to be a member of IPOB, and who begged not to be named, disclosed to Fides that before Kanu’s arrest, Ekpa had worked closely with Kanu, even in the formation of the ESN.

‘He knows a lot of things about the workings of IPOB. He was close to Kanu, and no one would have ever agree that at some point he would become rebellious to the same Kanu whom he described then as the supreme leader and to whom he placed his discipleship.

‘I think he is just a greedy character, because even before the arrest of Kanu, he had once attempted to raise funds through our brothers living overseas. But it was after the arrest of Kanu that he came out fully to show himself. Several attempts by Kanu, even from prison, to try to clip his wings have failed. 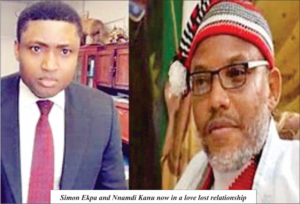 From making broadcasts, he built a crop of radical individuals for himself and they referred to themselves as the auto pilot group. Most of his boys working as armed men are breakaway boys of Kanu’s ESN who Ekpa recruited and have been using for nefarious purposes,’ the source said.

The source stated that in the heat of insecurity in Anambra State, before the state governor, Prof Chukwuma Soludo, dislodged them, Ekpa maintained a camp in a part of Ihiala and his boys were among those who were collecting money from people before any ceremony could be held.

Our source continued, ‘You know the notorious bandit called Double Lion who was killed early this year in Ihiala? He and many other boys were working for Ekpa. IPOB also has its own boys who work as security to any area they find themselves in. Their only problem was that in any town they established themselves, they would not want to see police in that town. They were friendly to locals, but Ekpa’s boys rather terrorize locals.

‘You will remember that Anambra became a little cooler since after Double Lion was killed. It may also interest you to know that Double Lion and his men were not killed by police or any federal forces; they were killed by a special squad from ESN who felt that Ekpa and his boys were giving them a bad name. Ekpa and Kanu’s faction of IPOB have been at a logger heads for some time now but they are trying to keep it under wrap.’

Recently, Ekpa, speaking from Finland, declared a five-day holiday in the five Southeastern states. No reason was given for the declaration, but speaking on an internet show, ”Have Your Say”, anchored by US based journalist, Rudolf Okonkwo, Ekpa said that December 9, 10, 11, 12 and 14 had been declared as sit-at-home days.

He threatened that anyone who dared to come out would be dealt with. He also stated that the group might likely disrupt the 2023 election in the Southeast, saying it was only concerned about the restoration of Biafra.

Though the first day of the sit-at-home was not adhered to, as people in many towns in the Southeast went about their normal businesses, on subsequent days, especially in Enugu and Imo States, there were incidences of violence, suggesting that Ekpa and his men might have decided to make real their threat.

Meanwhile, spokesperson of IPOB, Mr Emma Powerful, had urged the people to ignore Ekpa and go about their lawful businesses. He said, ‘IPOB never issued any sit-at-home order on these days mentioned because we are not miscreants, senseless, or jobless people.

‘IPOB who is concerned about our people cannot issue such brainless uncaring 5-day consecutive sit-at-home order to suffer (sic) our people during this critical time of the year when people are trying to make up in their businesses for the year.’

Speaking on the plan to disrupt the 2023 election, Powerful disregarded it saying: ‘Again, everyone has his or her rights to go and collect his or her PVC from their polling and registration centres without molestations. IPOB never boycotted election and has nothing to do with Nigeria’s shambolic elections.

Our people should be prepared and ready to confront any fool who dares to enforce such wicked sit-at-home. Moreso, ESN operatives and IPOB volunteers will be out on these dates to protect our people and the markets.’

In what looked like taking the fight in his hands, Kanu who is still being held in a detention facility of the DSS in Abuja, was said to have told his lawyer to quickly reach out to Emma Powerful and the Directorate of State, to issue a press release cancelling the sit-at-home.

Kanu had reportedly wept over the or gy of killings in Igbo land, attributing it to people who he said were Igbos but who had long sold their consciences and were bent on destroying Igbo land. Though Kanu did not mention Ekpa, he stated that those who were responsible for the killing were doing so to ensure that the federal government did not release him, as they were using the name of IPOB to perpetrate crime.

A public affairs analyst, Mr Paul Ebe, while speaking with Fides, put the whole blame of the killings in the Southeast on Kanu. He said: ‘Why is he shedding crocodile’s tears today? Is it because someone else is doing for him what he would have loved to do by himself?

Fides has however learnt that Kanu’s lawyer, Barr Nnaemeka Ejiofor, has begun a process to initiate a suit against Ekpa for his perceived criminal activities in the Southeast, using IPOB.

As at the time of writing this report, many members of Kanu’s faction of IPOB had declared war against Ekpa and had been reporting his social media handles, while some of them had been suspended.