Nigerian fans will be feeling hard done by the failure of the Super Eagles to qualify for the FIFA World Cup in Qatar as many will remember the day Nigeria lost to Ghana – on the away goal rule – after playing a 1-1 draw at the Moshood Abiola Stadium in Abuja.

Nigeria failed to find that winning goal and it’s a bitter experience that Super Eagles Defender, Leon Balogun said he would not forget in an hurry.

In a chat on The Beautiful Game YouTube podcast, Balogun blamed the inability of the team to find the back of the net in the first leg, claiming that the whole scenario would have been different had they scored in Ghana.

He also claims that he still doesn’t understand why the away goal rule still stands in Africa after it was cancelled everywhere else.

Balogun also felt that the team were disorganized by the antics of Ghana, to change the venue last minute and even suggested they might have used black magic (Juju).

“It’s the first leg, we did not score, that would have changed the whole picture probably.

“It’s a bit funny because that season, the away goal rule was scrapped everywhere. I don’t know why they didn’t do it in Africa. I have no clue, until this day, I don’t understand.

“We did go to Ghana to play that first leg and it was a tough game. There was this whole fuss about them changing the stadium last minute where they’ve never lost, and they said whether juju may or may not have been involved”

He also highlighted the mentality of the coaching staff claiming that they seemed contented with the goalless draw away to Ghana.

“It was really, really tough and we ended up playing 0-0. I remember we had a meeting one or two days after and one of the staff said we’re 70 percent through and I thought to myself that can’t be right.

“We played a goalless draw away from home, if that’s helpful to anyone then it’s Ghana. We said we have to just pour our hearts out for that game.”

Balogun admitted that massive support of the fans made it a more bitter pill to swallow, and it was more heartbreaking to have lost the world-cup ticket in front of the fans.

“Driving to the stadium on that day, I was holding back tears because I was touched by the support. I’ve played with great support, I’m not trying to be disrespectful to any other place we’ve played with the national team before but Abuja that day was packed.”

“I saw little boys, girls, families, elders, everybody rooting for us. The stadium was packed, it was unreal and I said to myself just for them we have to make it.

“Obviously it was heartbreaking when we conceded that first goal, it was a tough one to take, came back with a penalty, we couldn’t just break them down.

“We had a few chances but nothing really that got to shock them. In the end you have to say Ghana probably deserved it because we came hard for them.”

“Second half they changed their shape and that was pretty much what took a bit of the wind out of us.”

Meanwhile, Morocco are the only African team still in the tournament after they advanced to the quarter-finals courtesy of a 3-nil penalty shootout Victory over Spain.

Ghana crashed out in the group stages, finishing bottom of Group H. 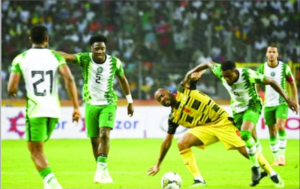 Nigeria’s Super Eagles are not among the 32 national teams from five continental confederations who made it to the World Cup Finals in Qatar, and certainly cannot be among the 12 teams left competing for the golden trophy—world sport’s biggest ever—by this morning. And of the five African countries who made it to Qatar last month, only Morocco and Senegal scraped into the Round of 16, and it is anyone’s guess how far they will go in this competition.

Had the Eagles been in Qatar, they would have given us something to hope for, something to cheer, and something to bring us together, which in turn, would have greatly helped to cool off the rising temperature in the political arena as we head into what is already a hotly contested election even before any votes are cast.

In this sense, for Nigeria, football is a serious political tool, if only our leaders know this well enough as leaders in Latin America, Europe and elsewhere do. But the significance of the Super Eagles to Nigerian life goes much beyond the pride and the Cathartic effects their jerseys dribbles, provide us here at home.

Until recently, the Super Eagles, our senior football team, were perhaps Nigeria’s foremost icons of cultural diplomacy who did more to put our country on the global map than our national flag. Before Boko Haram, Nigeria was known around the world for its then two main cultural exports.

There was corruption and 419, twin evils that became synonymous with Nigeria, even though they existed, and still exist, just about everywhere else. But there was also the Super Eagles, who competed, and shined, in many a global or continental footballing event.

A Saudi friend once told me he could not always reconcile the behaviour and widespread negative reputation of Nigerians in his country with the flourishing of the Super Eagles playing on the pitch he saw on television as a young man in the 1990s.

So, he decided, he said, to stick with the more positive image of Nigeria the Super Eagles provided him with as he reeled out Nigeria’s former football stars to me. His story made me proud to be a Nigerian of course, but as is usual for most of us, only briefly so, because most Nigerians know that their country has persistently been no more than a sad story of what might have been.

A lot has changed with football in Nigeria at all levels over the past few decades. And while there are still bouts of brilliant performances here and there, everyone recognises that we are nowhere near where we used to be. Indeed, as a national cultural export, football has since been overtaken by Nollywood and especially our music industry, not to talk of Boko Haram for which nearly everyone else on this planet identifies Nigeria, no thanks to that Chibok girls’ abduction eight years ago. But the critical question is: how has Nigeria’s footballing fortunes dipped so badly from our peak in the 1990s?

Many Nigerians will tell you the answer is simply and squarely corruption, and they will be right. Rampant corruption across all sectors of governance has ensured that Nigeria has remained no more than a kid with potential even after six decades of self-governance.

Football management has been particularly hit, with elections into the top echelons of the football association just as much a do or die affair as in the wider politics. The result is a compromised league system that is scarcely worth its name. Tied to the apron strings of local state politics, these teams, and their training and playing infrastructure, have all but collapsed too.

Lower-level football, such as the previously famed Under 13 and Under 17 competitions have collapsed, alongside the local teams that even in the 1990s used to draw thousands to their weekly matches. School level football teams and most importantly street football, the two main birthplaces of footballing talent in Nigeria have also collapsed.

Cities and towns in Nigeria used to have tens, if not hundreds of local football teams that were based mainly on more or less street football, but which also comprised a pool from which new talents found their way up the ladder into north Africa and better, Europe. Today, all these have gone or nearly gone.

Thus, unable to regenerate itself, football in Nigeria is now a ghost of its former self. Even so, while corruption at all levels of the game and across other sectors of life in the country will go some distance in explaining the current rot in the game, it does not tell the whole story. After all, corruption in Nigeria is scarcely worse than in say, Brazil and Argentina, before or now.

Also, corruption tends to favour closed and authoritarian political systems like military dictatorships or single party states. We might also expect the flourishing of the arts, sports and other creative activities to be much hampered by rather closed political systems.

If the above is true, then we should expect to have worse outcomes for corruption, football and other creative arts during Nigeria’s years under various military governments. But quite the opposite has been the case. There is no question that corruption is worse now than during the military both in scale and perversity across society.

And more poignantly, Nigeria’s footballing fortunes were much better during the military than today, right across the national or local league teams. At the same time, however, our music industry has grown even as other arts, like literary writing, have stagnated, or even decayed.

Clearly, corruption alone cannot explain the current situation with our football. But I think two other answers—both of them largely external—lie elsewhere. One is the massive global political shift that has taken place since the fall of the Berlin Wall in 1989. The collapse of communism in Eastern Europe meant that for the first time in its history, Europe could now come under a single political union, in substance, if not in form.

European Union membership grew from 12 in 1990 to 27 in 2015. For football, that meant an expansion and rejuvenation of national and continental league systems and competitions. UEFA—the European footballing body—and other national leagues in England, Spain, Italy, Germany and so on, were all restructured in the decade after 1990.

The result is a huge fall in the number of African talents playing in European leagues, corresponding at the time with a huge increase in the number of talents from former eastern European countries playing in the same top euro-leagues. Whereas Africans and Latin Americans dominated foreign players in the five top European leagues in the early 1990s, today, the Africans have been replaced, literally, with players from former eastern European countries.

Migration rules and other factors, such as continental competition seasons, have made it cheaper or at least easier for clubs in England, Spain, Italy, Germany, France and Portugal to import new talent from eastern Europe than from Africa, and the flood of scouting officials in Africa gradually dried up.

At the same time, however, this period has corresponded with a greater increase in the number of African migrants living or working in Europe. The children of these African migrants in the fringes of cities like Paris, London, Madrid, Barcelona, Brussels and so on also became a large pool of talent from which European clubs could draw as their national games grew in leaps and bounds.

From England alone, Nigeria can field a Super Eagles team entirely made of players whose parents were Nigerians but who are now themselves British. These twin political geographies, I think, explain the collapse of Nigerian football today as much as any other. But the real question is what can we do about it?