It was a mixture of Joy and astonishment at Nnamdi Azikwe University Teaching Hospital, Nnewi, following the news of the birth of four children by a young mother on Thursday, 1st September  2022.

The woman, while speaking with Fides, expressed how honoured, blessed and loved she felt to be bestowed what she described as a rare gift by God, saying she never imagined it.

She said she was not aware that she carried quadruplets. According to her, the scan result showed they were three, which, she said, were also affirmed by the doctor. 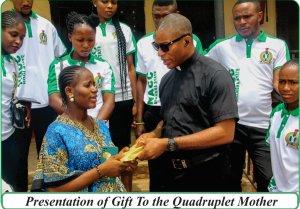 ‘They were almost rounding off the session when they discovered there was another baby remaining there, so they had to bring the beautiful baby out also. And when you see her you will know she is a miracle,’ she said.

Rev. Fr. Mouzoba of Awka Catholic Diocese said he was happy and thankful to God for the gift of a set of quadruplets to a member of the NACC Family.

His words, ‘The mother is in high spirits and in good health. We have seen the baby and they are very happy too. 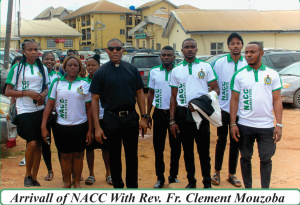 ‘By the grace of God, when we received this news by the first of September, we had to ask for help, donations from good spirited people, priests, lay people, friends, classmates and so on, who have contributed wonderfully and generously.’

He encouraged the public to help people in whatever situation  they could help.

‘We have to learn to be happy with people who are happy, and then, if you see any situation where you can help, don’t resign, because God doesn’t waste time in helping us,’ Fr Muozoba said. 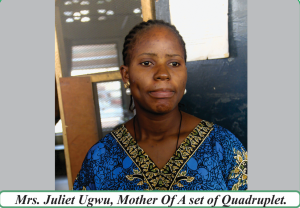 Mr. Basil Silas, an Anambra State President, National Association of Catholic Corps Members, while speaking with Fides, expressed, on behalf of the association, their joy and happiness at the news of the quadruplets.

‘We see this as an opportunity to come and show our love, being that she is our member and also to thank God collectively for this kind of blessing,’ he gushed. 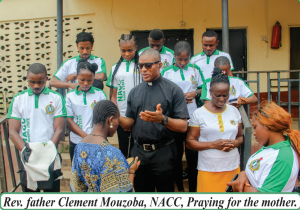 At the close of the visit, the priest and the corps members presented a sum of six hundred thousand Naira, both in transfer and cash, to the mother, while congratulating her on the successful child birth. 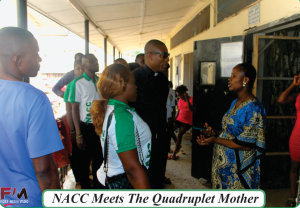