The NUJ gave the commendation when its executive and some other members of the Union led by the Council Chairman, Comrade Odogwu Emeka Odogwu, paid a courtesy visit to the CMD at the Teaching Hospital, Amaku, Awka. 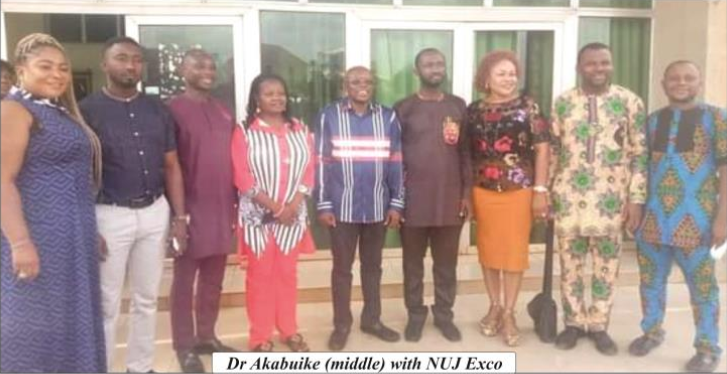 Speaking during the visit, Comrade Odogwu said Dr. Akabuike had brought tremendous innovations and transformation to the hospital since he assumed office.

According to the chairman, the union had observed an improved power supply and an introduction of the Service Compact With all Nigerians (SERVICOM) for improved and efficient service delivery.

He also commended the CMD for building a Dialysis Centre, a world class private ward, renovation of emergency unit, renovation of the mortuary, and good eatery, among others, that had given life to the hospital.

Responding, Dr. Akabuike thanked the NUJ delegation for the visit and harped on the need for Journalists to always be objective in their reportage to avoid feeding the public with wrong information and fake news and in order to add value to society.

He described Journalists as the moral conscience of society and tasked them to engage in investigative journalism to unravel the many ills of society.

In a vote of thanks, Comrade Ngozi Obileri, the union’s vice chairman, described Dr. Akabuike as a philanthropist and urged him not to relent in his service to humanity.