The worsening security situation in Anambra State has become a source of bother to journalists in the state who have called on the state government and relevant security agencies to halt the trend.

The journalists, including Mr Jude Atupulazi, Editor-in-Chief of Fides Newspaper; Mr Onu Nwanosike, Bureau Chief of the Nation Newspaper and Mr Tony Okafor of Razor News, expressed concern over the relative ease with which crimes and killings were perpetrated in the state and regretted that on many occasions the perpetrators had evaded arrest and prosecution. 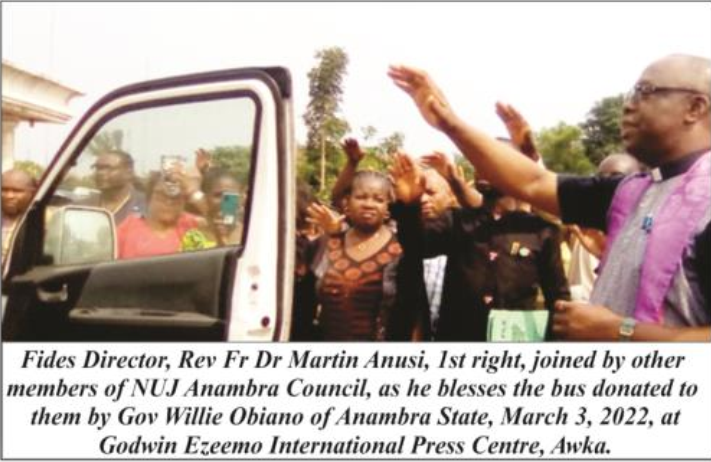 Calling for the convoking of a security summit of all stakeholders in the state, the media practitioners recalled that no fewer than 16 lives were recently lost at a burial ceremony in Ebenebe, Awka North Council, which came on the heels of killings and shootings at Oko, Ekwulobia and other suburb in the state.

They therefore called for a proactive approach, rather than reactionary, from the security agencies in the state.

They tasked residents to wake up in their various capacities to help tame what they described as the monstrous threat to society.

In a speech earlier, the Commissioner of Police, CP Echeng Echeng, urged journalists to live for one another, as well as see the police as partners in the service to humanity.

Speaking at the brainstorming session, the Sponsor of the 2022 March Congress of the NUJ and Vice-Chancellor of Nnamdi Azikiwe University, Awka, Prof Charles Esimone, described journalists as important components of society, noting that UNIZIK’s partnership with the men of the fourth estate of the realm had had a veritable influence in the success of his administration.

Prof Esimone noted that despite all the challenges faced by public universities across the country, Nnamdi Azikiwe University had continued to record massive success in learning, research capacities and administrative advancements.

He also recognized the import of the University’s partnership with the public, which, he said, had solidified ties that had culminated in a series of interventions and facility developments that had aided human living and contributed to problem solving in society.

In a remark, the Acting Registrar, Federal Polytechnic Oko, Mr. Obini Onuchukwu, applauded the State NUJ executive led by Comrade Dr Odogwu Emeka Odogwu, for taking the union in the right direction and urged them not to relent in their drive towards lifting the state NUJ to an enviable height.

Earlier, the NUJ State Council Chairman, Comrade Odogwu, inaugurated 28 sub-committees and charged them to work for the good of the Union. He also urged them to refer to the state executive, should they encounter challenges in the cause of carrying out their designated duties.

Highpoints of the event were the swearing of Oath of Allegiance by the sub-committee members and the official reception of an 18-seater bus donated by the Anambra State Governor, Chief Willie Obiano to the Union.