It was a harrowing experience for some journalists in Anambra State, last Tuesday when they were assaulted by suspected thugs and members of the Anambra State Vigilante Service, AVS, at New Auto Spare Parts Market Nkpor, where they had gone to cover a protest by some traders against an alleged plot by the leadership of their association to build extra shops on top of theirs without their consent.

The protesters, who said they were the shop owners/landlords in the market, alleged that the chairman of their market association, Mr Elisius Ozokwere, had announced the plans during their meeting and had commenced implementation without consulting them.

The leader of the aggrieved shop owners who carried placards with various inscriptions, Chief Obiora Ofoleh, said they were not against whatever plan the chairman had but insisted on the adoption of due process.

‘After his welcome speech, the next thing he did was to announce to us that he had concluded plans with different authorities to build lockup shops on top of our decking. Everybody was surprised.

‘We wanted to ask questions but he ignored us and handed the microphone to his secretary, Mr Uchenna Maluobi, who announced to us that they had concluded plans; that immediately we get down from the hall, they would start collecting N20,000 for each form and N1.2 million for the construction.

‘The meeting was inconclusive because everywhere became rowdy. We had expected him to reconvene the meeting and listen to us because we are the landlords and the shop owners of this market. This market is a private market. We bought the land. 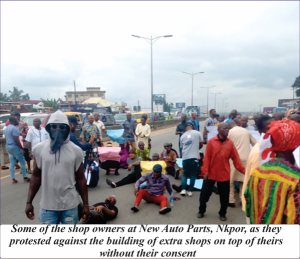 ‘We were initially at Moore Street. That was in the late 80s. Then in 1989 we packed in here. We bought this land, we perfected it, built the shops and allocated it to our members,’ Ofoleh explained.

This led to the protest of last Tuesday by the shop owners who marched up and down the expressway at the Auto Parts axis of the Enugu-Onitsha Expressway. But as some newsmen were covering the protest, all hell was let loose as some suspected thugs loyal to the embattled Ozokwere descended on the journalists, together with members of the Anambra Vigilante Service, AVS, attached to the market.

Some of the journalists were beaten, with one kicked into a gutter. Their working tools such as cameras and microphones were taken, with one of them losing the sum of N38, 000 while being brutalized. The victim was so beaten that hours later, blood was coming out from one of his ears.

Later, two of the journalists were taken inside a section of the market by the AVS operatives where they went through their mobile phones and deleted all the pictures taken.

When the journalists went to the head office of the AVS in Awka to lodge a complaint, they were given the phone to speak with one of their bosses whose name was not given. He condemned the attack and promised to ensure justice was done. According to him, even the police could not stop people from holding a peaceful protest, least of all assaulting them; even as he apologized to the journalists.

Efforts to hear from the chairman, Ozokwere, proved abortive as he seemed reluctant to speak with journalists who covered the protest, even when they visited his shop. He equally hung up on them when they tried speaking with him on the phone later.