Jonathan’s Gaffe and Why Nigeria Will Remain Stagnant

In Nigeria, most times when you see crowds of people either protesting or urging a politician to come out and contest, that exercise is nothing but what is called ”arrangee” in local parlance which means something that has been set up, usually by unseen hands manipulating those people from their hide out. Such exercises are usually to fly a kite to feel the reaction of the public or to fool them into believing that the protest is genuine or that the person being wooed to contest an election is genuinely being sought after.

But in rare cases, such exercises are truly genuine as in the case of those rooting for former Anambra State governor, Peter Obi, to run for presidency which has now been turned to rallying support from across the country to assist in raising funds for his campaign effort. But I will come to this later. What I will first of all touch is the issue of former Nigerian president, Goodluck Jonathan, being ”begged” to contest.

Ordinarily, Jonathan, just like any other Nigerian, should be free to aspire for any position in the country. But, as I noted, that is ordinarily, which means something that would normally be the case. But nothing in today’s Nigeria is normal and that is if the country has ever been normal since after Independence close to 62 years ago. Jonathan whose home has been ”besieged” today by Nigerians who see him as the country’s long sought for Messiah, is the same man who was disgraced out of office seven years ago by the same cabal setting him up to ”spoil show” for Ndigbo of Southeast extraction. 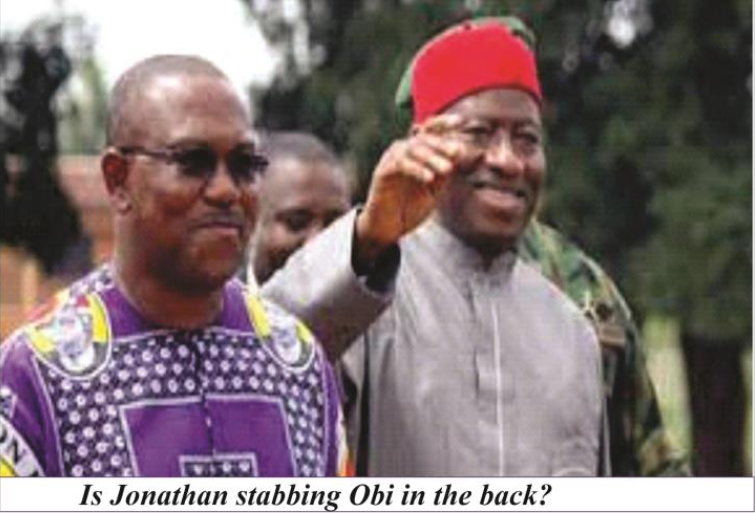 Forget the famous acceptance of defeat by Jonathan in the aftermath of the results of the Presidential Election in 2015. He had no choice then, than to do what he did at the time because the powers that be, including America, wanted him out. But even at that, what Jonathan did by accepting the results ”in the interest of the nation” remains a good action as doing otherwise could easily have led to the shedding of blood.

As a man, at that time, Jonathan wasn’t bad. He tolerated a lot of shit as the president which the incumbent, Muhammadu Buhari, will not tolerate today. But then, Jonathan was seen as weak and was anxious not to run foul of the north.

That was why he largely neglected the south and did more for the north who still discarded him when they were ready to execute their next game plan. Today, however, the same north is goading Jonathan into running for the presidency despite the fact that he has already travelled that road before.

But what really rankles about his believed aspiration is that he is allowing himself to be used to block the chances of the Southeast which had massively supported him during his time. In fact, even though there was nothing Igbo about Jonathan; despite having two middle names of Azikiwe and Ebele, we had virtually adopted him as our own, being that he was then seen as the nearest thing to a Southeast president.

He was also very close to Peter Obi who is today one of the leading lights of the Igbo Nation for the presidency. It was really largely because of Obi that Jonathan garnered many votes in the Southeast, with Anambra recording the highest.

Now, today, Obi is running for president at a time even our bitterest enemies acknowledge that it is our turn to be president. This is after all the other zones of the country have taken a shot at the presidency, with Jonathan himself among them. Indeed, Jonathan’s aspiration once again proves the unreliability of man. How would he look Obi in the face today that he wants to quash Obi’s chances?

How would he look the Southeasterners in the eye when he comes campaigning here? Doesn’t Jonathan realize that he’s being used to achieve the agenda of the north? What is Jonathan doing in the All Progressives Congress, the party that dealt with him? Doesn’t all this prove that no one can be trusted? There really are many questions I want to ask Jonathan as the cabal flies the Jonathan kite.

Now to Obi. I did say that he is among the few politicians that are different from the crowd. Right now, many Nigerians from across ethnic divides are rooting for his presidency and this is genuine. Obi is not known to ”waste” money to hire crowds as he detests spending on what he must see as frivolities. So when you read that many groups are rallying support for his presidency you will immediately know that those people are doing so out of their own conviction.

I was recently added to one of the groups and we are now being asked to donate money to fund Obi’s campaign. This is a far cry from working for the likes of Atiku Abubakar, Bola Tinubu and others. They are people who will woo you with enough money to make you dizzy. But for Peter, you have to believe in him to work for him. This is what makes Peter different from the pack.

However I will not be surprised if the PDP refuse to allow Peter to represent them. Even if he wins the ticket, I still won’t be surprised if politicians unite to work against his victory. This is simply because they fear that Peter will block every leakage from which they milk the nation dry. For them, the fear of Peter is the beginning of political wisdom.

Even now it is believed that some Southeast governors are averse to Peter’s aspiration, with the Governor of Abia State, Okezie Ikpeazu, said to have endorsed the aspiration of the Rivers State Governor, Nyesom Wike. His Enugu State counterpart, Ifeanyi Ugwuanyi, seems to have toed same path by failing to turn up when Peter Obi visited Enugu State to meet with delegates. I don’t want to talk about Dave Umahi of Ebonyi State who did everything to scuttle Obi’s chances last time out.

Some of these Igbo governors, except Prof Chukwuma Soludo, of Anambra State, are obviously envious of Obi’s recognition by many Nigerians as the best fit for the presidency and so would rather support a non-easterner for the apex position over Obi. We are our own worst enemies, aren’t we?

Then in the larger Nigeria, it will be difficult for any person outside the north to win and do well. This is because the north has laid many land mines for whoever would succeed Buhari unless such a person is such that will submit to their manipulation.

They know the truth about who the best candidate is but out of the need to continue milking the nation dry, they will go for their ilk who will allow them access to the treasury. So the rot continues.

This is why the country will not progress any time soon, so long as the forces holding it to ransom do not let go.

There are some characters who are running for the presidency that have no reason for disturbing the public space with their aspirations but those are the characters the thieving political class wants. See why we have been stagnant?

Our only hope remains that nothing lasts forever. Perhaps one day God will change the hearts of those who have been pinning us down, or he will enthrone someone against whom they can do nothing, just as was the case in Anambra.

Then the godfathers in the state threw up a certain Chris Ngige whom they wanted to use in continuing to fleece Anambra dry. They took him to the shrine where he swore an oath of allegiance. He agreed to go with them to the shrine because he needed power.

He got it eventually by hook and crook and remained in the saddle for close to three years before the bubble burst. Those who put him felt he was not acting according to plan and they kidnapped him. The rest is history, but suffice it to say that Ngige’s experiences contributed to the salvation of the state today from godfathers.

For now, Nigeria is in the throes of death occasioned by the tight grip of the cabal that believes they own the country and thus should determine who becomes president. They have pocketed the country, and even the president, who is today being remote-controlled. These men have put the nation on auto pilot and only God can help check the downfall the country is experiencing.

As the country gears towards electing their next president, will God choose this time to wrestle power from those evil men and place it on the palms of the long awaited Messiah? No one knows until the appointed hour comes.

For now, the country is stagnated and not showing any signs of survival.