The Labour Party senatorial candidate for Anambra Central, as well as former national chairman of the All Progressives Grand Alliance, APGA, Senator Sir Victor Umeh, says his joining Labour Party has afforded him the opportunity to be reconciled with Mr Peter Obi whom he described as his brother. Obi is the presidential candidate of Labour Party.

Umeh who sated this last Tuesday at Godwin Ezeemo International Press Centre, Awka, while addressing newsmen, described the reunion as a historic opportunity that would enable him to work with Obi to salvage Nigeria.

The senator who alluded to high level conspiracy by some forces in APGA to ensure he did not clinch the ticket of the party in the last primary election, said he got a call on May 29 by Obi, shortly after the APGA primary, with Obi expressing shock over the treatment he, Umeh, was given in APGA, and asked him to join him in Labour Party to continue his aspiration and to contribute in the struggle to save the country.

‘There was a conspiracy not to allow me to win the APGA Primary Election, and immediately after that, I received a call from Mr Peter Obi to come over to Labour Party to vie for Anambra Central Senatorial ticket. I welcomed the idea and also saw it as an opportunity to reconcile with him,’ Umeh explained.

He said he had worked together with Obi in the past to conquer many odds and recalled how he brought APGA in Anambra and how he met Obi who declared to run for APGA in October 2002, before some people came in to cause a rift between them. 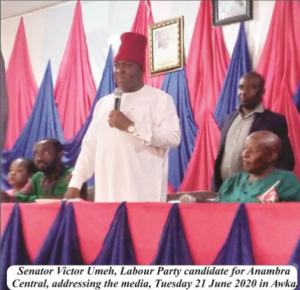 ‘I separated with Peter, not because we were fighting over the state’s resources but because of principle and because some mischievous people sowed a seed of discord between us. But thank God we’re back together. We parted for ten years but are back today through divine intervention,’ Umeh said, noting that he had never doubted Obi’s quality in administration, something, he said, even Obi’s enemies would agree with.

He predicted that the 10th Senate would be turbulent, given the situation in the country and said that was why every state had to send their best to the senate, even as he reeled out his many interventions in the senate during the brief period he was there.

‘We must all contribute our quota to make it work. Peter Obi is a revolution. He is the best. Peter Obi is not a career politician. He should be allowed for the seat to enable him to address the current security, social and political challenges confronting the country at the moment,’ he stated.

Umeh urged all Nigerians to contribute in making Obi president, noting that he was already doing his bit by being part of every discussion for the choosing of Obi’s running mate.

He described his mission to the senate as selfless and borne out of the desire to help his people, noting that the senate was where people with courage were required.