High Chief Onunkwo, who made the call in his remarks at the funeral ceremony organized for the two late priests, at St Vincent’s Catholic Church, Nimo, Njikoka LGA, Anambra State, on Thursday, February 18, described the late Catholic priests as great disciplinarians who knew the value of education. 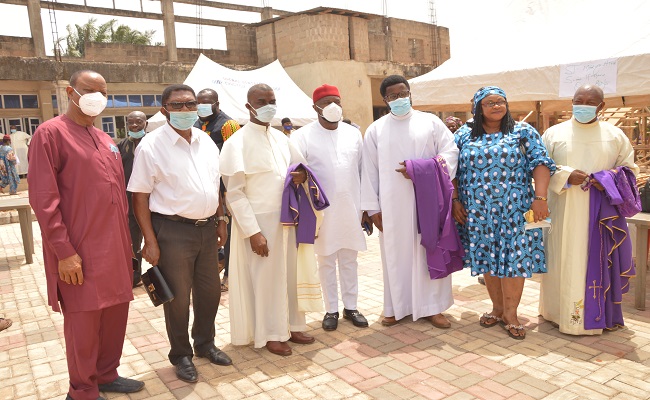 Recalling his relationship with Fr Akpu while he was a Spiritual Director at St Dominic Savio Seminary, Akpu, Orumba North LGA, and with Fr Oliobi, who was a former principal of St Mary’s High School, Ifitedunu, Njikoka LGA, Onunkwo, said the two late priests had passion for the proper formation of the young people.

According to him, the late Rev Fr Paul Akpu, as a spiritual director, was a role model to many. While the late Fr Raphael Oliobi, who was a school principal, as well as the rector of St Dominic Savio Seminary, Akpu and that of St JohnBosco Seminary, Isuaniocha at different years, was an ideal formator, a consummated administrator and a father who was also a role model to many that passed through him.

JohnBosco Onunkwo, who is a frontline Anambra State governorship aspirant under the platform of the All Progressives Congress (APC) in the November 2021 Election, pledged his support to any project which the Church would decide to immortalize the two late priests with.

He condoled with the Catholic Diocese of Awka, Nimo Catholic Community and the families of Akpu and Oliobi of Ifiteani Village, Nimo, over the demise of the two priests, noting that their deaths were great losses to the Church and humanity.

It will be recalled that Rev Fr Akpu and Rev Fr Oliobi, died on January 23 and January 26, 2021 respectively. They were buried at the Awka Diocesan Priests’ Cemetery, St Patrick’s Cathedral, Awka, on Monday, February 15, 2021.