The Management of St. John Innovation Institute of Management and Technology, JIIMATECH, NENi, Anambra State, has commenced activities that will enable it to gain specific course accreditation in 2022 through the National Board for Technical Education (NBTE) Kaduna.

The requirements of the NBTE, Kaduna for accreditation include the equipping of practical laboratories, procurement of conference chairs and classroom desks.

The Rector of the Institute, Rev. Fr. FrancisMichael Enyosiobi, made the disclosure in his address of welcome during the maiden exhibition ceremony of the graduating students while soliciting for financial and moral support from well-meaning individuals to enable the institute to live up its dreams, having gained federal approval in principle.

He explained that the ceremony was to enable the students to showcase what they had been able to produce on their own, saying that the Institute was known for innovation. He appreciated parents of the students for donating their sons and daughters to be trained in the institute, noting that each one of them carried their nodes of experience.

Tracing the history of the Institute, Fr. Enyosiobi recalled that the establishment of the Institute was initiated by the Catholic Bishop of Awka Diocese, Most Rev. Paulinus Ezeokafor. Coincidently the newly appointed Bishop of Nnewi Diocese, Most Rev. Bishop Jonas Okoye, opened up the then St. John Vocational Institute in September 1999 and secured her State approval in August 2000.

He said that the act made the people of Neni Community to nickname him Onwa St. John as the visionary founder and Director of the former St. John Vocational Institute. He noted that the institute has metamorphosed into St. John Innovation Institute of Management and Technology (JIIMATECH).

He revealed that the past and present administration of Anambra State Governors of Peter Obi and Willie respectively had been in support of the growth of JIIMATECH.

He disclosed that the governor’s wife, Mrs. Ebelechukwu Obiano, had been the noble mother of the institute since inception and commissioned the institute’s bakery on 1st December 2014. He noted that the award of honour bestowed on Mrs Obiano was due to her assistance to the institute which included the major upgrade of the school library to the tune of over 2 million Naira, and the commissioning of the one-storey kitchen complex.

He said the governor, Sir Willie Obiano’s assistance, saw to the roofing of the academic complex housing 30 classrooms, 28 convenience rooms, excluding offices and stores, and 700 capacity auditorium, a transformer and one 18-seater Hummer Bus.

The Rector appreciated what he described as the sound contributions of the Commissioner for Tertiary Education, Science and Technology, Anambra State, Mrs. Sally Mbanefo; the Commissioner for Children’s and Women’s Affairs, Dr. Mrs. Ndidi Mezue; the facilitator of the exhibition, Dr. Chiemelu Emegakor; the father of the day, Chief Uchenna Nwankwo, alongside members of JIIMATECH’s governing board led by Chief Lawrence Obianodo and the Chairman of the Board Committee on projects, Chief Engr. Paul Enidom.

Delivering his address, the Chief facilitator of the exhibition, Dr. Chiemelu Emegoakor, described technical education as the bedrock of development in any society. He recalled that from 1960 to 1966, the economy of South Eastern Nigeria was said to be the fastest developing economy of the world, saying that such was driven by technical education and industries set up by Dr. Michael Okpara. 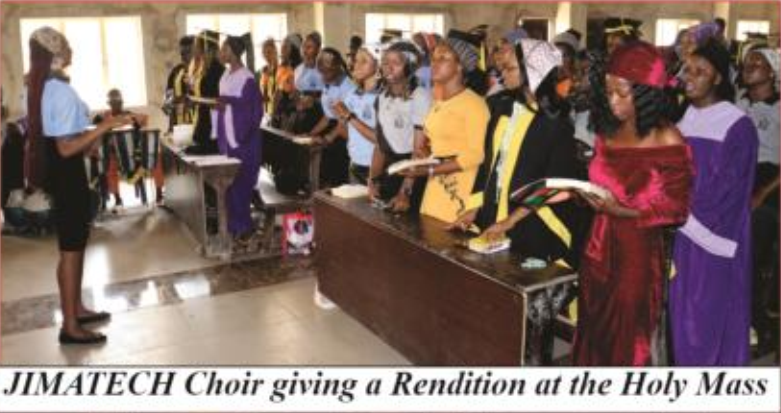 He said that the shift from technical education and its collapse heralded the collapse of the economy with consequential rise in unemployment rate and other social vices like armed robbery, drug abuse, and prostitution, among others.

Addressing the graduating students, Dr. Emeagoakor beckoned on them to utilize the skills which they had acquired and improve their lives and others around them, saying that they were expected to set up workshops and practice the acquired skills.

He congratulated the staff members, especially the Rector of the institute, for his passion and commitment, which, he noted, had brought about massive transformation in the institute and tasked them to sustain the tempo. He urged government at different levels to provide the graduating students with soft loans to help them to start off.

Speaking to Fides, the Anambra State Commissioner for Children’s and Women’s Affairs, Dr. Ndidi Mezue, appreciated the Wife of the State Governor, Dr. Mrs. Ebelechukwu Obiano, for her vision and passion towards humanity, especially for partnering with the institution. She expressed optimism that the graduating students would become employers of labour, thereby reducing the unemployment rate.

Adding their voice, some of the graduating students from Fashion, Cosmetics, Hospitality and Tourism Departments; namely, Ukamaka Ugochukwu; Uzo Ozioma Francesca; Iweze Kenechukwu and Ihem MaryCynthia Idimmachukwu, thanked the management of the institute, saying that the rigorous training and its associated stress were worthwhile as they helped to make them more resilient in their pursuit to add value to society. They said that the acquired skill would help them build themselves and assist them in raising the required funds in their endeavours.

They disclosed that they had started marketing their products through their various social media platforms as they already had online shops where they received patronage from people who were unknown to them. They expressed optimism in increasing their reach.

Earlier in his homily, the newly appointed Bishop of Nnewi Diocese, Most Rev. Jonas Benson Okoye, advised the students to put what they had learnt into practice to become employers of labour.