No fewer than 170 new students were last Sunday, May 16, admitted as bonafide students of the Catholic Diocese of Awka-owned St John Innovation Institute of Management and Technology (JIIMATECH), Neni, Anaocha LGA, Anambra State, on the occasion of the maiden matriculation ceremony of the institution.

Leading in the concelebrated Holy Mass to mark the event, the Bishop of the Catholic Diocese of Ekwulobia (CADEK), Most Rev Peter Ebere Okpaleke, congratulated the Board of Directors led by the Chairman, Chief CJ Lawrence Obianodo; the Management Team led by the Rector, Rev Fr FrancisMichael Enyosiobi; the staff and the students, for the growth of the twenty-year old institution. He also congratulated the Catholic Bishop of Awka Diocese, Most Rev Paulinus Ezeokafor and his auxiliary, Most Rev Jonas Benson Okoye, who initiated and sustained the institution when they served as former parish priests of St John’s Parish, Neni at various periods. 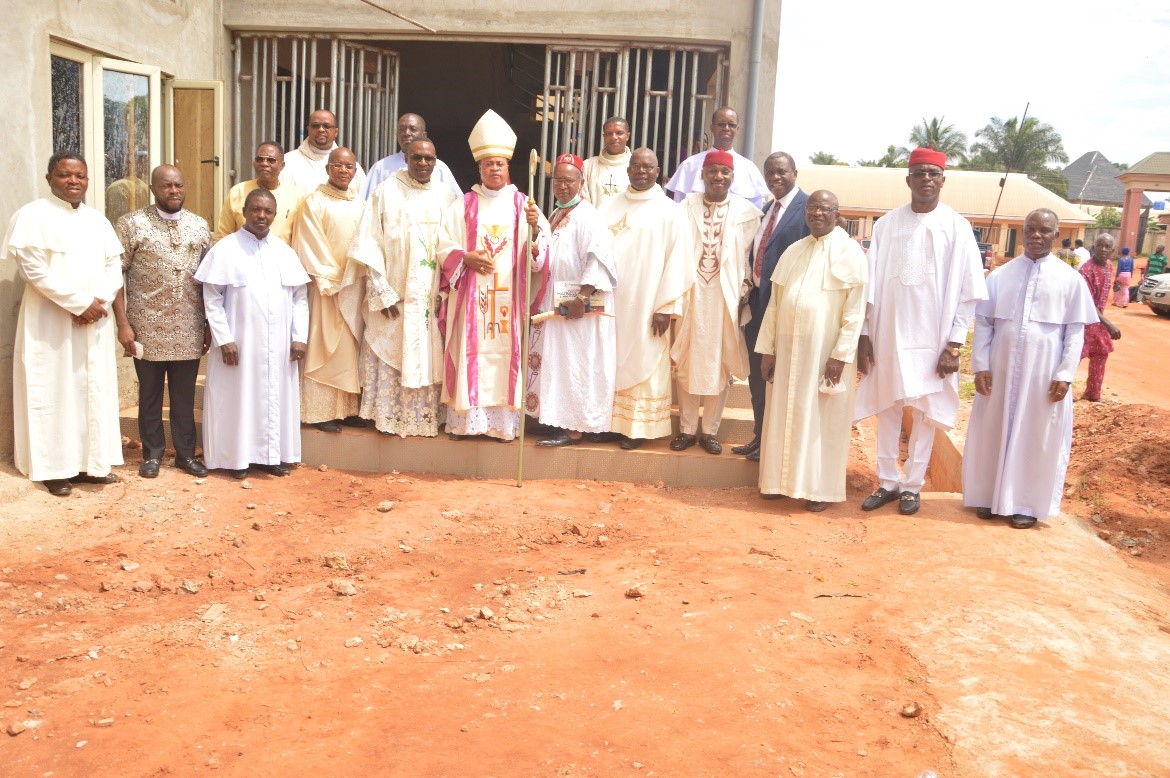 Fides gathered that the institution which was initiated by Bishop Ezeokafor alongside the then former parish Council Vice Chairman, the late Sir Anthony Enukeme, took off as St John’s Vocational Institute, Neni on February 15, 1999; with ninety six students and six teachers, grew to St John Vocational and Technical Institute, Neni in May 2013, with Rev Fr FrancisMichael Enyosiobi as the director and metamorphosed to St John Innovation Institute of Management and Technology (JIIMATECH), Neni in June 2019, with Rev Fr FrancisMichael Enyosiobi as the pioneer Rector.

In his homily, the Bishop of CADEK, Most Rev Okpaleke, charged the students to dispose themselves to the learning and proper formation which they were being given in the institution. He urged them to work hard so as to after their stay in the school, become self-reliant and successful job creators. The bishop warned the students against turning themselves into failures, but, to instead, be useful to themselves and society so that the institution and the Diocese would be proud of them in future.

Speaking on the occasion, the Vice Chancellor, Nnamdi Azikiwe University (NAU), Awka, Professor Charles Okechukwu Esimone, who was the matriculating officer, enjoined the students to live up to the expectations of the institution as they pledged in their matriculation vow.

Prof Esimone, who identified lack of people with skilled manpower as one of the problems of Nigeria, charged the students to make the best out of the vocation education so as to be very fit for employment after their graduation.

The vice chancellor promised to create avenue for the best graduates of JIIMATECH to be employed in the university’s Chike Okoli Entrepreneur Centre and the yet-to-be completed guest house projects.

Also speaking, the member representing Anaocha/Njikoka/Dunukofia Federal Constituency, Hon Ferdinand Dozie Nwankwo, described technical education as the base of contemporary development. Hon Nwankwo, who was the special guest of honour, encouraged the students to put in their best in their studies so as to graduate with best skills, which, he said, would enable them to sustain themselves and their families in future.

The federal legislator promised to key a project of the school into the Zonal Intervention Fund of the Federal government so as to ensure its continuous growth.

For his part, a frontline Anambra State governorship aspirant on the platform of the All Progressives Congress (APC) in the November 2021 election, High Chief Engr JohnBosco Onunkwo, advised the students against giving in to what he described as intellectual poverty.

Onunkwo, who described education as the key to success and development, enjoined the students to rise above their human weaknesses and believe in themselves so as to excel in life.

In his remarks, the rector of JIIMATECH, Rev Fr FrancisMichael Enyosiobi, congratulated the newly matriculated students and urged them to live up to their expectations as bonafide members of the institution.

The rector appreciated the various donors and supporters of the institution for their goodwill, which, according to him, had kept JIIMATECH going, urging them not to relent.

Rev Fr Enyosiobi, who recalled that the academic block was kicked off with the N30m which was donated by the former Anambra State Governor, Sir Peter Obi, and the N10m donated by the Young Shall Grow Motors Boss, Chief Vincent Obianodo, and was roofed with the money donated by Governor Willie Obiano, solicited for donations for the completion of the project.

Highlights of the event were donations in support of the mini fundraising which doubled with the matriculation ceremony, and presentation of an award to Hon Dozie Nwankwo.  Some of the donors included Senator Victor Umeh, Hon Dozie Nwankwo, High Chief JohnBosco Onunkwo, Professor Charles Soludo, Chief Larry Ezeani and Chief Obiora Obianodo.

Among others that graced the event were Chancellor, CADEK, Rev Fr Lawrence Nwankwo; the Vicar for Clergy, CADEK and member, Board of Directors of JIIMATECH, Rev Fr Charles Umeoji; former Anambra State Commissioner for Social Welfare, Women’s and Children’s Affairs, Mrs Victoria Chikwelu and Igwe Damian Ezeani, Ugonabo of Neni.