The Chief Executive Officer of JEZCO Oil and Gas, Chief Joseph Ezeokafor, has reaffirmed support for Engr. Dominic Okafor’s aspiration to represent the people of Aguata Federal Constituency in the Green Chambers under the All Progressives Grand Alliance, APGA. 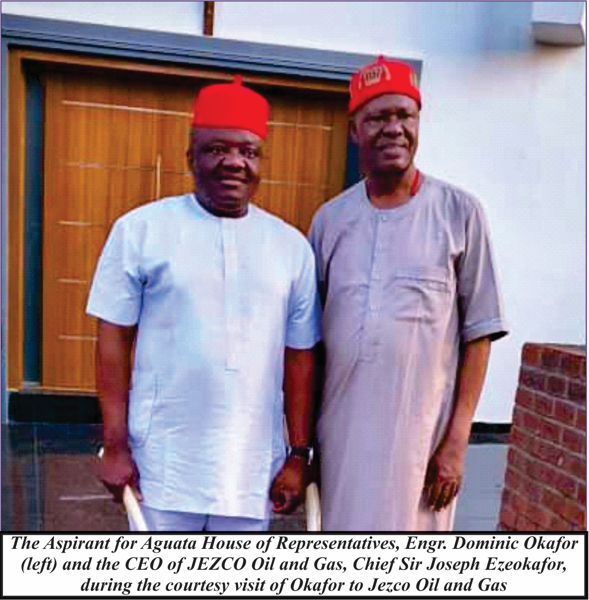 He reaffirmed his support during a courtesy visit by the aspirant to intimate him about his preparedness to rebuild Aguata Federal constituency through inclusive representation in order to deliver to the drive to the grassroots the dividend of democracy.

Sir Ezeokafor who serves as the National Leader of APGA, beckoned on Engr. Okafor to ensure the fulfillment of his promises and supersede what he described as the brilliant achievements recorded by his predecessor when elected into office.

He charged him to desist from the conventional narrative, which, he said, politicians were known for, and play politics of inclusion and people centeredness, while ensuring accountability and integrity in the execution of projects.

Sir Ezeokafor maintained that his interest was devoid of personal gains, saying that effective representation and good governance would bring about steady economic growth to enable the downtrodden and voiceless enjoy a breath of hope.

Earlier, Engr Dom Okafor disclosed his plans for Aguata Federal Constituency and assured Sir Ezeokafor of his total commitment and willingness to carry everyone along in his legislative dispensation when elected, saying that all individual communal needs would be attended to. He further said that he had already engaged consultants who were currently carrying out needs assessment in all the 14 communities in Aguata Federal Constituency.

He noted that the collaboration of the APGA national leader would enable him to achieve his aspirations of building a greater Aguata.