The Justice, Development and Peace Caritas (JDPC), Awka Diocese, last Saturday, July 2, 2022 in partnership with Catholic Caritas Foundation of Nigeria, CCFN, lunched a One-Day Training and Workshop on Formation of JDPC in Parishes, Deaneries and Regions.

The intense Training and Workshop which was aimed at educating and enlightening members of the pious society of its role in the society, was held at the Secretariat Hall, St. Patrick’s Catholic Cathedral, Awka, Anambra State. 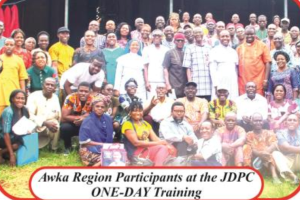 Speaking during his welcome address, the Diocesan Director of JDPC in Awka Diocese, Rev Fr Levi N. Ukor, said the JDPC was a very important Commission in the life of the Church. He urged all to support the JDPC in her mission of charity in society. He noted that the Commission was in dire need of support to its charity projects that cut across hospitals, correctional centres, schools and even for the displaced in society.

Fr Ukor who decried what he described as the pitiable retrogressive state of Nigeria due to bad governance, charged the government to rise up to its responsibility of good governance and security of life and property, and political parties to have good ideologies that would promote Nigeria.

He also called on Nigerians to do their part, in 2023 elections by checkmating their representatives and voting in their conscience, for that desired quality representation and better Nigeria. 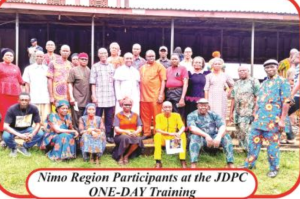 Speaking to Fides shortly after the training, the facilitator, Mr Joseph Uzoma Nkamuke, a Research and Development Specialist, CCFN, Abuja, who based his lamented the poor state of health system, high rate of unemployment, spate of killings, endemic corruption, insecurity and poor quality of education as some of the negative influences which he said had negated bad governance, as well as hindered positive change in Nigeria, insisted that the 2023 election must be free and fair, and winners should be determined by votes cast in polling units, and not in courts where the highest bidders were often declared the winners.

Mr Nkamuke who frowned at the idea of Muslim-Muslim ticket, advised the electorate against giving in to the tricks of vote-buying politicians, who he described as criminals that would, if they made it to elective positions, steal the money meant for public development. 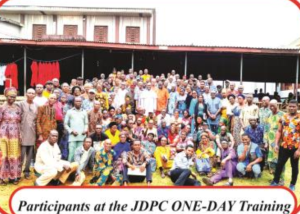 For his part, Honourable P.C. Adinuba, Awka JDPC Diocesan Chairman, charged the electorate to live up to their after election responsibilities of checkmating the elected leaders as well as asking questions about constituency and state projects at all levels.

He likewise urged all the faithful of the diocese to participate actively in activities of the JDPC at the Diocesan, Regional and Parish level. He likewise enjoined all to obtain and make good use of the Permanent Voters Card, PVC.

The event had close to 200 persons in attendance with delegates from Awka, Adazi and Nimo regions. 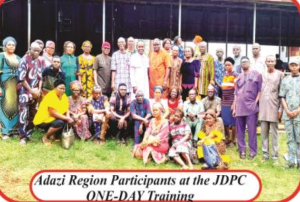 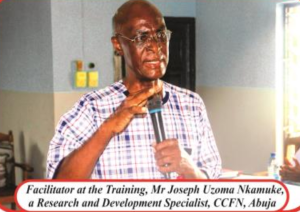 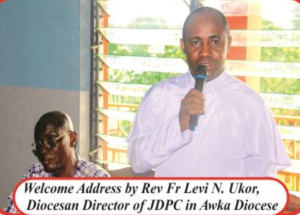