The Justice, Development and Peace Caritas, JDPC, Awka Diocese, began their 2022 JDPC Week with a Holy Mass to Flag off  the ceremony and Fund-raising for empowerment of the less privileged on Sunday, 4th September 2022 at Our Lady of Assumption Parish, Nimo. 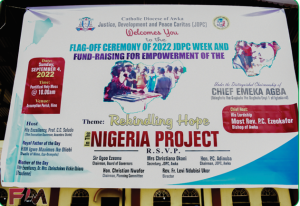 Justice, Development and Peace Caritas (JDPC) is a structural response to the Second Vatican Council (1962-5) appealing for the church’s involvement in the building of a just and peaceful world. The purpose of this organization is to coordinate the activities geared toward a positive change in the human condition, such as poverty, religious bigotry, election malpractices, diseases, and injustice.

Speaking during the event,  the Director of JDPC, Awka Diocese, Rev Fr Levi Ndubisi Ukor, disclosed that the  2022 JDPC Week which has its theme as ‘Rekindling Hope for the Nigeria Project’ was mapped out for: sensitization and right education of citizens; advocacy- prompt response and activism to the needs of the poor, vulnerable and marginalized; partnership with donor agencies; youth and women mobilization and empowerment; empowerment programme via micro credit (focusing on the poor, the vulnerable and the marginalized); in house trainings and capacity building for civil society groups and workers in public and private sectors; promotion of social justice by working with other civil societies and organizations, among others. 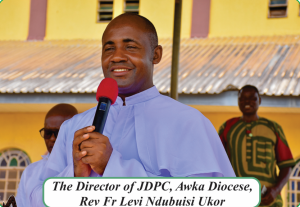 He explained that the JDPC was situated in all parishes and dioceses and their Week was celebrated annually to mark the Commission’s commitment to catering for the needs of the less privileged in the society and to hold projects that would benefit the country.

Representing the Bishop of Awka Diocese, Most Rev Paulinus C. Ezeokafor, in the concelebrated Holy Mass, Rev Fr Alfred Anazodo, centered his reflection on commitment. Where he noted that most people do not understand nor imbibe the act of being patient and committed to whatever they did. 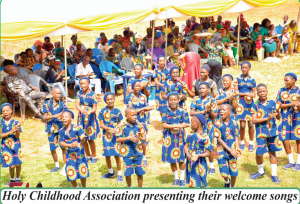 He explained that people these days always sort for the easy way out that led to their not being perfect in most things they found themselves doing. He blamed the deteriorating state at which Nigeria was on politicians who he said were less committed to the growth and development of the country. Advising that those who would be representing us subsequently would desist from the wrong paths.

Fr Anazodo while talking about JDPC, recalled that even from the days of the civil war experienced in Nigeria, Caritas had been a major source of support to the church, noting that they supplied food and other items to cater for the welfare of the people.

On behalf of the Bishop, Fr Anazodo thanked the JDPC for all they had been doing for the less privileged in the society while he marked the 2022 JDPC Week open.

He called for a national rethink to set up policies that ensured equal participation in general affairs of things and a deliberate effort to accommodate various groups of people irrespective of their race, ethnicity, gender, religious or political affiliations.

For his part, the chairman of JDPC, Awka Diocese, Hon. P.C Adinuba, rolled down the events of the past years, as well as told the people of how the week was going to be. He thanked in a special way all that had supported to make the event a success, as he wished Nigeria got a better chance for change. 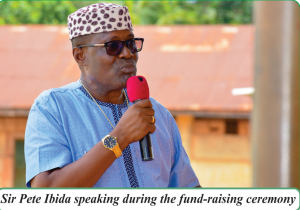 Highlight of the event were welcome songs by Holy Childhood Association of the parish; fundraising by Sen. Victor Umeh; Chief Emeka Agba, the chairman of the event who was represented by Barr. Tony Mbuba; Mr Pete Ibida; Hon Ferdinand Dozie Nwankwo, represented by Hon. Francis Obidike; Hon. Chimezie Ikwunne; among others.