A national planning committee for the funeral of the late Chief Mbazulike Amechi, Minister of Aviation in the First Republic in Nigeria has been announced.

In a press release signed by Tagbo I. Amechi for the family, it was revealed that Chief Emmanuel Iwuanyanwu, would head the committee for the planning of the funeral, with popular Nigerian politicians, patriots and businessmen as members. 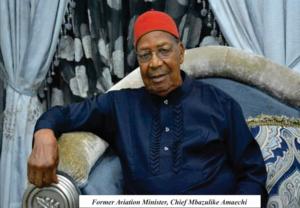 Tagbo, in the release said: ‘Following the transition of the foremost statesman, nationalist and one of the last remaining fathers of Nigerian Independence, Chief Mbazulike Amechi (Dara Akunwafor), Nigeria’s Minister of Aviation in the First Republic, on 1st November 2022, the family, in consultation with his associates and other stakeholders, wish to announce the setting up of a Committee of Distinguished and Respected Nigerian Leaders to plan a befitting burial for this great Nigerian Patriot.

The release stated that in due course, the committee would make public, further details of the burial of the patriot.