When a people; even animals, are pushed to the extent that they have their backs against the wall, they have no option than to stand and fight back. It was what happened when the Nigeria/Biafra War broke out fifty-five years ago. The Igbos were targeted across the north and hounded and killed in their dozens. The survivors ran back home. They decided that since Nigeria did not want them they were left with little or no option than to seek a separate country. This they did. But those after their hide still came after them and this led to war as the Igbos felt that they had been pushed back against the wall. 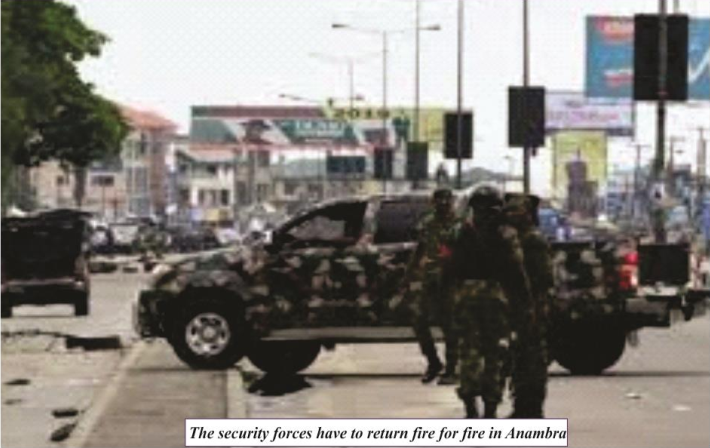 It was from all intents and purposes, a just action by the Igbos at the time as they were clearly not the aggressors but victims. Today, the scenario has not overly changed as the Igbos of Nigeria are still handling the short end of the stick and again there is a clamour for secession. However, this time, we are not being killed just by outsiders, but by ourselves, and that is the unkindest cut of all.

All over Igbo Land today is bloodshed and none more so than in Anambra State. Those behind it are our people who claim to be fighting for freedom but who keep attributing their atrocious acts to those of other tribes or the federal government as it suits their fancy. Tragically, some of our people keep believing this trash and inadvertently justifying the evil and thereby giving fillip to those behind the mayhem.

Last Sunday witnessed a harvest of blood as seven people were killed at various places in Anambra in utter defiance of Gov Chukwuma Soludo’s entreaties and even warnings. The climax of the killings was the discovery of the head of a member of the Anambra State legislature, Hon Okechukwu Okoye, who was earlier kidnapped along with an aide, with the two later beheaded. Their heads were displayed at two different places, while their headless bodies were discovered elsewhere.

Okoye represented Aguata 11 State Constituency which is the constituency of the state governor. His killing was obviously clearly meant to rile the governor.

Understandably the governor was very angry and announced a N10 million reward for anyone with information that will lead to the arrest of the killers. He also declared war on the hoodlums.

Some days later the state Police Command charged the people of the state to stop shielding the criminals in their midst, even as they declared that those criminals lived among them instead of in the bush as the criminals wanted people to believe. The commissioner then urged the various communities to volunteer information to the police for them to effectively tackle the menace of the unknown gunmen whom the police described as known.

The police’s charge is something I agree with in toto. I’ve always maintained that every crime has a base. No crime comes down from the air. There will always be people privy to happenings around them but either from fear or compassion these people may hold back from talking. However what is happening in Anambra today has defied all logic. It is now a total war against the people of the state and in any war situation it is either one is eliminated or one eliminates the other. There is no logical reason why a group of people should hold an entire state to ransom, while the people keep mum as they are led like sheep to the slaughter house.

Some people still see what is happening from the prism of sentiments as to seeing those behind the killings as having justification for doing so. There will never be any justification for crime, any sort of crime. What is bad is bad. I’ve often heard some youths declaring that they are angry against society and I’ve always asked them why they should be angry when in the first place they brought about the problem on themselves.

A close look at some of these people claiming to be angry will reveal that they are people who wasted their early opportunities; people who ran away from where they were sent to learn some trade as apprentices. People who had the opportunity of going to school but who dropped out. When they realize they are too old to go on apprenticeship or to go back to school they transfer their anger to society as though it was someone that told them to abandon their education or flee from their masters in business.

Some of them are also ex-convicts, who, after spending some time in prison, discovered that they were too old to do anything meaningful.

It is not for anything that you find the majority of those agitating for Biafra from among the group I mentioned. Having failed themselves, they want to drag others down to their sordid level. They have become envious of successful people, but where those they envy worked hard to attain their levels, these people did nothing other than whiling away their time.

Even now, it is a common sight to see many of such youths sitting in front of shops in the morning and evening drinking and staring rather balefully at those going or returning from work. They do nothing for a living and rely on others to eat and drink. When they don’t find people to pay for their food and drinks, they steal to provide for themselves. These people have thus become ready tools for mischievous people to manipulate.

That was why in the beginning of this madness currently ravaging the Southeast, this category of people were easily co-opted by the hoodlums to join in their warped fight for freedom and we are all seeing the results now. They are venting their pent up frustrations on ordinary, hardworking folks as though those people caused their problems. They have been using their organization as a platform to hit out at others in what is increasingly looking like an act of envy. These people have swollen the ranks of the so-called freedom fighters and are not ready to listen or take instructions from the mainstream body of the Biafra struggle. They are monsters that have been unleashed but which cannot be brought back to the cage by those who released them and there lies the tragedy of it all.

Those who unleashed them are now asking the people to rein them in but like crazy dogs they are snapping at everybody and ready to tear then apart. They have tasted blood and ransom money and they don’t want to leave such.

Their latest actions have clearly proved that they are not ready to embrace dialogue or any peace overtures. They are daily ramping up their dastardly activities and even last Tuesday there was this report about the kidnap of a popular hotelier in Aguata. This is not what we are, as Soludo would say. It does not define us. The way we are going, we will soon have no place to call home. That is what will happen if we do not rise as one to find a solution to this madness. Sitting on the fence will no longer solve anything. Neither will keeping mum. What has come is what is trying to consume us. We should no more give any form of justification to this. Like Soludo and the police have charged, if we see something we must say something. Silence in this case will kill. If you die by talking and die also by keeping silent, isn’t it better to talk?

A strange and ravenous beast is in our land and we must look for drastic solutions to tackle it. It calls for an all-out offensive, for every hand to be on deck.

We are losing a lot by the current spate of insecurity. More and more people are thinking about relocating to Delta to do business and in all this, who is losing? Buhari or us? The north or us? Do those two care if we burn down our land? How they must be laughing at our foolishness!

I’ve heard people attributing the current chaotic situation in the east to bad leadership but does that justify the destruction of our land? Does that justify turning our guns to our own blood and flesh? Even if the killers come from neighbouring states, they are still Igbos. So what’s the gain?

But since all options for peace so far proffered have been rebuffed, there is only one thing to do: return fire for fire!