The winner of Aguata Federal Constituency primary election of the All Progressives Grand Alliance, APGA, Engr Dom Okafor, has declared that his victory is for everybody and not his alone.

Speaking to Fides after the results of the primary election was announced, Okafor described his victory as a case of no victor, no vanquished, while stating his resolve to make Aguata Federal Constituency great, habitable and prosperous.

He showered encomiums on the National Chairman of APGA, Ozonkpu Dr Victor Oye, for conducting an election that, according to him, was adjudged free and fair by all and sundry. 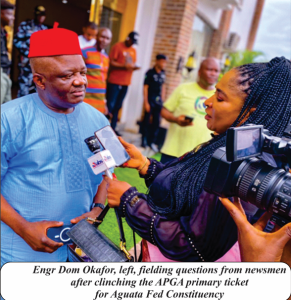 He also appreciated the governor of Anambra State, Prof Chukwuma Soludo, for providing what he described as a safe environment that enhanced the conduct of the election, even as he thanked his brother, Hon Ikechukwu Umenwa, for ‘an amazing show of sportsmanship, understanding the rudiments of politics on what it should be and should not be, and for understanding that the essence of politics is to make better the living standard of people and not to aggravate bitterness.’

Okafor, who is a Rotarian, also extended a hand of fellowship to Hon Umenwa to join him in building a prosperous and greater Aguata Federal Constituency.

‘To all Aguata stakeholders and delegates, rest assured that posterity will always be kind to you people for your immense and unwavering support all through this project and beyond,’ Engr Okafor concluded.