Let me start by thanking the almighty for the gift of life and the gift of love. It’s amazing the way the two things work together. I have always maintained that life is definitely intertwined with love because loving is living. More succinctly put, to love is to live.

Anyway before I digress, I earlier thanked God for bringing me back to work and to you all after having stayed away for about four months as a result of a domestic accident that almost destroyed all I had built over the years, until God intervened.

Let me tell you my story. It was on January 29, 2022. I slipped and fell on the tiled bathroom floor. It happened in a flash, but I remember trying to catch myself as I fell, afraid I would hit my head on the tiled floor. So I consciously landed with my right palm on the hard, slippery and wet floor. My leg was twisted awkwardly but I managed to sit up, only to look at my right hand and saw it in a more awkward position. I became scared. 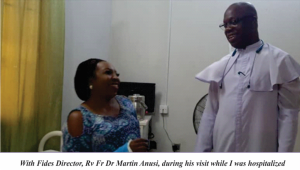 I knew that there was something not right about the shape in which I found it. I remembered the sound I heard when I landed and wondered if I had cracked my bones. Anyway I managed to get up and to spare you the details of how I was able to make it to my car, I noticed it was swelling with every passing minute and the pain was killing.

I found out I couldn’t open my car door. So, I used my left hand to open it, hopped into my car and managed to get it started. It was time to engage my gear to ‘drive’. I couldn’t! So, yet again, I used my left hand and while I thanked God for the wisdom of the white man for constructing automatic cars, I drove off and headed to Onitsha.

The more I drove, the more I felt this throbbing pain tear its way up and down my entire right hand. I would take a look at the hand from time to time as I drove and noticed that it was swelling up even more! Thankfully, it was an environmental sanitation day, so the roads were very free. I managed to make it to Obosi and the piercing pain, which was now getting to my shoulder area was unbearable.

I parked by the Akora Junction and called my dear husband, informing him I couldn’t drive any further. He was already waiting close-by after I called him as I bought fuel at the Jane Frances fuel station along the Umuoji Road. He encouraged me to drive further up where he was waiting and then, took over the wheels.

He took a good look at the hand, which was now crazily swollen and asked me how I was able to drive with my left hand all the way from Awka. I just smiled in pain and told him that if you found yourself boxed into a corner, you won’t have any choice than to fight for yourself. I knew I had to drive myself home and I just had to take the plunge.

Well, he told me we would drive straight to the hospital and I vehemently refused. I told him I wanted traditional bone healers to handle it. It was actually crazy because, looking back now, I can’t believe I refused to go to the orthopedic doctors to handle it. I however had my reasons. 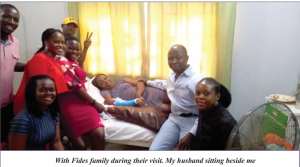 I remember about 5 years ago when a friend of mine was involved in a car accident that almost claimed her life. An under aged boy on her street who was trying to learn driving with his mum’s car, hit her alongside other bystanders. Her two legs were broken in two places each. I went to visit her at the orthopedic ward of the Borromeo Hospital here in Onitsha and was shocked when I saw screws on her two legs.

I can’t even begin to explain what it looked like but it was just a lot of screws and bandages and it looked really scary. I asked her how come and she told me they had to use the screws to hold her bones in place as they were broken. That image has never left my mind. So, back to my story, when my husband insisted we should go to Borromeo Hospital, I vehemently and stubbornly refused.

He asked me why and I told him my mind did not accept Borromeo or even any orthopedic hospital. I told him that I needed to go to a place that my mind accepted for my treatment so that I would heal fast. When he saw that it was difficult to convince me to go to the hospital he decided to respect my decision but told me that if they found the treatment of the traditional healers inadequate, he would take me to the hospital. I accepted.

Of course I didn’t know that it was a fracture as at the time. I thought it was just a dislocation of my wrist bones. Anyway, we made enquiries and we were referred to this woman who was said to be one of the very best in traditional bone treatment.

We were able to locate her place and after she examined my hand she told me pointedly that my wrist was broken. That was my first shock. We had to go for X-ray and after the X-ray result confirmed that it was indeed fractured, we returned and commenced treatment. Let me state here that in my entire life, I had never experienced the amount of pain I had to deal with in the six weeks that I underwent treatment traditionally.

It was nightmarish. After six weeks we realized that my hand was looking funny and my pain was still intense, so we went for another X-ray and the results showed that I urgently needed to be operated on in order to correct the badly placed position of my bones.

That was when it dawned on me that the orthopedic hospital which I greatly dreaded was my only available option to have that hand treated.

Moving forward, I was directed to the amazing Dr Amaechi Nwachukwu of Princeton Orthopedic Hospital at Ngozika Estate, Awka. He was able to carry out a corrective surgery and today, I can say that I’m recovering pretty well and have gradually started making use of that hand.

In a very special way I want to thank everyone who stood by me throughout this ordeal. My family is very grateful for all your prayers and visits, both to my home and to the hospital. I thank my boss, the Digital Director of Fides Media Ltd, Very Rev. Fr. Martin Añusi, and indeed, the Fides Family, who constantly prayed and encouraged me through it all.

I appreciate also, the Fides Welfare Association, ably led by the chairman, Alex Adejoh, for their visits, both to my house and to the hospital, after my surgery. I appreciate you all. I thank my Frank Talk fans for the constant calls and messages in the last four months I was away from this page. To all my colleagues in the media world who never stopped checking on me, I thank you all.

In a very special way, I thank the Editor-in-Chief of Fides Media, Hon. Jude Atupulazi and Lady Ifeoma Nwadi, for their resilience, even though my absence caused extra stress for them at work. God bless you both. I thank the National Association of Women Journalists (NAWOJ), ably led by our South East Vice President, the effervescent Hon Stella Igboka, for their great show of love.

I may not have successfully captured everybody here, but with a lot of gratitude and love, my heart goes out to each and every one of you who went out of their way to show me that I meant something. It wasn’t lost on me. God bless you all real good.

You see, one of the things that scared me the most throughout my ordeal was the fear of not being able to use my right hand again. I am a writer and that’s what makes me happy. So if anything happened to my right hand, my life would never be the same again because like I always ask, what is life without writing? The media world rocks!!!

Four months after my accident, I have resumed work and life is gradually settling to normal. I can only keep praying for you guys, especially now that there seems to be total chaos in not just the South East Zone, but in the entire country. There seems to be bad news trailing us constantly as a people and from the look of things, it is only divine intervention that can lift us from this terrible phase.

So, with a deep sense of love and appreciation, I thank you all on behalf of the Amunike family. God bless us all! Yeahhhhhhh! It’s good to be back!!!!!!