Nigeria’s Sport Minister Sunday Dare said it’s a ‘new dawn’ for Nigerian Athletics as top athletes representing the nation left the best for the last day of the Oregon 2022 World Athletics Championships in Eugene, USA by winning a Gold and a Silver medal. 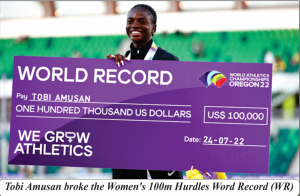 Reacting to Nigeria’s late rally for medals in Oregon and the country’s best performance ever at the Championships, Sports Minister Sunday Dare said these heartwarming feats will herald a new dawn for Nigerian athletics.

‘I am so proud of what Tobi Amusan, Ese Brume and even those who didn’t get on the podium have achieved in Eugene, Oregon. This is the beginning of great things for Nigerian athletics. This is a new dawn,’ Dare said.

‘Years of hard work and consistently knocking on the door has yielded the right dividends. For the first time in our history we have a World Champion. This is huge. Congratulations to Nigeria.’

The Minister also highlighted a few other positive results for Team Nigeria even though they did not end in podium finishes.

‘For me, these medals are not the only positives from the World Championships. The 4×100m relay teams (men and women) showed a lot of promise for the future,’ Dare added.

‘The women barely got here as the 16th best team in the world but they got so close to getting on the podium, the men also gave it their best shot and showed they have a bright future. Our athletes in the short sprints also showed character.’

‘Some of them are competing on a high level stage like this for the first time, rubbing shoulders with very experienced and tournament tested veterans and legends and not falling too far behind in extremely tough situations.’

‘They can beat their chests and be proud of what they have achieved. We now have the responsibility to continue to support them by creating the right environment for their growth,’ Dare added. 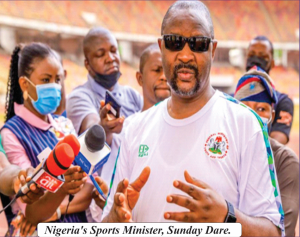 With the World Championships now over, focus would shift to the Commonwealth Games starting later this week in Birmingham, United Kingdom.

‘We have gained a great momentum going into the Commonwealth Games now, this will definitely inspire Team Nigeria to making a huge impact in Birmingham,’ Dare concluded.