It is Turn of Southeast to Produce President – Bishop Ezeokafor

The Catholic Bishop of Awka, Anambra State, Most Reverend Paulinus Ezeokafor, says it is the turn of the people of the Southeast Geopolitical Zone to produce the next President of Nigeria.

Bishop Ezeokafor who stated this at St. Patrick’s Catholic Cathedral, Awka, said that Ndi Igbo (Southeasterners) deserved to be the president of Nigeria in 2023 because they were part and parcel of the country.

The Catholic Prelate observed that the Igbo was the only major tribe that had not produced the president of the country since the return to the current democratic dispensation, adding that for the sake of equity, other Nigerians should allow the Igbo to produce the next president. 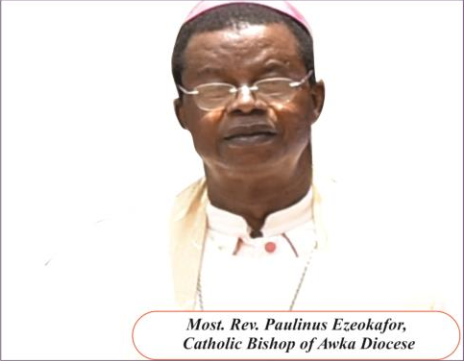 ‘Some people might be thinking that the Igbo presidency is a privilege, but it is not. It is their right and for justice and equity, the Igbo should occupy that position, otherwise, agitations and frictions will continue in the country.

‘It is this unfair treatment that is making some groups to be complaining as they feel their people are marginalized and are not given due recognition in the arrangement called Nigeria.

‘Truly, these groups are not complaining about nothing. If we take Nigeria as one country, an Igbo should be the president in 2023; otherwise, we should go back to the regional system,’ he said.

Bishop Ezeokafor also spoke on the security crisis in the country, arguing that it would appear that some people were feeding fat on the situation in many parts of the country.

He said that since it had become obvious that those in charge of security were not doing their work to the satisfaction of Nigerians, the best option was for them to quit as nobody was indispensable.

According to him, a situation where killings, kidnapping and banditry had become routine in many states of the federation was not acceptable. He therefore urged President Muhammadu Buhari to do something about the situation.