These three simple words are very powerful and symbolic. It is the sentence of all sentences. It is the mother of all grammatical constructions. It is simple but heavy. It is both philosophical and theological. If you dissect it, many layers would be discovered.

The language is both divine and human. The first word ‘it’ is a neutral pronoun. The second word ‘is’ is a singular present verb. The last word ‘finished’ is the past tense of finish. One is ultimately moved to ask: what is finished? The answer cannot just be given easily. It ought to be weighed carefully and to be synthesized. It is a grammatical and an ontological construction. During written examination, the examiner often instructs, “Attempt all questions.” Therefore I am set to attempt dissecting the terminology of the subject matter. I stand to be corrected.

On the Friday of all Fridays popularly known as Good Friday in heaven and on earth, Our Lord and Saviour, Jesus Christ, was crucified on the Cross for the redemption of fallen humanity. It is a sacrificial option. Once upon a time in the animal kingdom, there was an emergency meeting of the rats. The agendum was how to curb the bloody menace of the cat in their domain. A lot of suggestions were made. 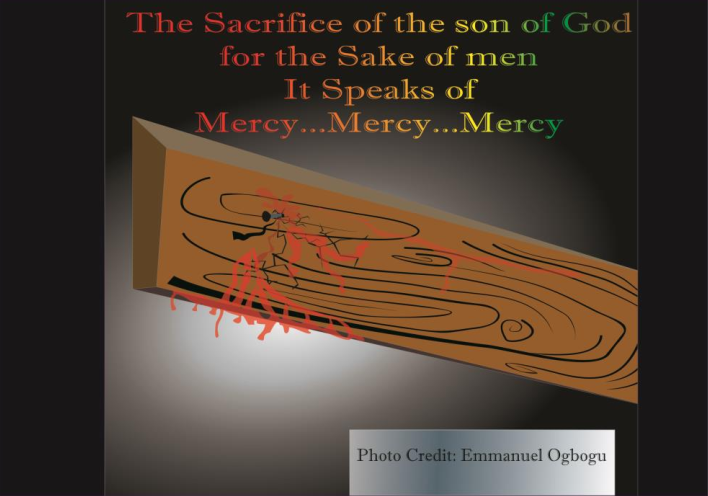 Finally it was agreed that a bell should be hung over the neck of the cat so that the noise would alert the rats to take cover. It was a nice idea. However, the problem was: who is to bell the cat? None of the rats volunteered to make the ultimate sacrifice. It was a herculean task. At last the meeting ended without practical solution. Then the rats went home sorrowfully. That is why till today the cat is still devouring the rats.

On the human side, all men and women sinned and fell from grace to grass. Consequently, the gate of heaven was shut from them. Human beings were left to their fate. They wandered in darkness and were bound to get lost forever. But the mercy of God is immense. At the fullness of time He sent his only begotten Son, born before time began, to come to the rescue of sinful humanity.

This Saviour volunteered himself as a sacrificial Lamb. He was incarnated, suffered, was crucified on the Cross between two notorious brigands. He hung on the infamous gibbet for hours and ministered from it by forgiving his enemies. He commended his mother into the hands of his beloved Apostle John.

He promised Paradise to the repentant thief. He emotionally asked the Father why he forsook him. When his throat ran dry, he asked for water. Unfortunately his crucifiers offered him vinegar or poison. He tasted it and shouted, “It is finished!” Then he bowed down and died.

‘It is finished’ is a double edge sword. Humanity finished Christ through the poisonous drink. On the other hand, Christ the Messiah finished with humanity by dying on the Cross. Thus his salvific ministry has been accomplished. Then he was buried.

All hope was lost by his followers. Fortunately he rose triumphantly from the tomb on the third day. Thereby he finished with death and conquered it through his resurrection. May we give a standing ovation and glory to Our Lord and Saviour Jesus Christ!

Yes, Jesus Christ has finished his role as the Redeemer. He has brought universal salvation to all and sundry. Nevertheless, each and every one of us has to work for personal salvation by repentance from sins, living good life and embarking on the corporal and spiritual works of mercy.

After we have done all that is humanly expected of us, then can we say that it is finished.  With divine grace we shall then look forward to the crown of salvation. But if we are found wanting, then it is not yet finished. Struggle continues till death do us part.

It seems I sound strange in my write-up this time. There is no cause for alarm because man is a bundle of possibilities. It is a proverbial write-up. Inspiration comes with divergent wisdom at various times. The die is cast!

It is finished can be expressed in negative ways. Our country Nigeria is finished presently by myriad of problems. Bad leadership and corruption have crippled the Giant of Africa. Our economy is nothing to write home about. Economic hardship is biting the citizens to the point of no return. Anger and hunger are written on the faces of the people.

While we are mourning that the rat bit someone to death, the lizard went to sharpen its teeth. As bad leadership, corruption and economic bite are mesmerizing us, insecurity finished us with its bloody footprints all over the country. The North is bleeding. The South is bleeding. The West, the East and the Middle Belt are soaked in blood. Things have extremely fallen apart.

As a result the center can no longer control the blood flow. Boko Haram, Fulani bloody herdsmen, bandits, unknown gunmen, ritualists and yahoo boys have overrun this country. The security outfits are helpless. The Commander-in-chief is confused. There is no hiding place any more. Our last hope is divine intervention. If not, we are finished.

I was at a funeral ceremony recently. One of the servers came to me with smiles. She dipped her hand into her bag and presented a face mask to me. I rejected it with a wave of the hand. I vehemently told her, “It is finished.” She asked me what I meant.

I told her instantly that Coronavirus is not our problem. I underlined that our national problem is insecurity. I requested for insecurity face mask. She looked down cast and went away hopelessly. The Federal Government should commit all the arsenals at her disposal to curb the incessant blood-flow all over the nation. In fact, Nigeria is bleeding and about to die. She is finished!

Marriage is a life-long covenant between a man and a woman. It is for better and for worse. Most couples expect the better always. The worse is never wished. But when it comes it seems that everything is finished. No wonder the Holy Scripture says, “In time of prosperity, adversity is forgotten. But in the time of adversity, prosperity is not remembered” (Sirach 11:25 ).

No condition is permanent. Sweet is the product of sweat. Laughter comes today while tears come tomorrow. Both laughter and tears are embedded in the fabric of humanity. Therefore it is not finished when disaster comes. After rain comes sunshine. Light expels darkness. Fear hides in darkness. But courage takes refuge in light.

One day, a frustrated housewife stood at the entrance door of their family house with a long sharp knife, waiting for the return of her estranged husband to finish him and teach him the lesson of his life, which could be fatalistic. Immediately the husband stepped down from his expired car and was enthusiastically about to enter the house, the enraged wife brandished the knife before her unfaithful and wicked husband and shouted, “It is finished! Kneel down and say your last prayer.

Enough is enough!” As she was about to strike her target, there was a sudden lightening and heavy thunder, followed by a partial earthquake.  A voice from nowhere sounded, “It is finished!” The warring parties disappeared to oblivion. The marriage ended in no victor, no vanquished. It is finished for today.