The first and currently only indigenous religious of Isulo Catholic Community, Rev Sr M. Geraldine Ifeyinwa Enemuoh, DDL, has dedicated the Silver Jubilee Anniversary of her First Religious Anniversary to her late parents, Sir Pius and Lady Alice Enemuoh, who she said, made her who she is.

Rev Sr Enemuoh, who stated this at the thanksgiving Mass and reception for her 25 Years Anniversary of her first religious profession of vow in the Daughters of Divine Love (DDL) Congregation, held at St Charles’ Borromeo Catholic Parish, Isulo, Orumba South LGA, Anambra State, last Sunday, September 19, said her late parents were the first Holy Bible she read and her first role models.

‘I am dedicating my silver jubilee anniversary to my late parents for what they were to me. I cannot thank them enough. I owe them a lot for the proper upbringing and formation they gave me. I have not disappointed them and I will never disappoint them. At twenty-five years in my religious vocation, I feel happy and fulfilled,’ Sr Enemuoh said. 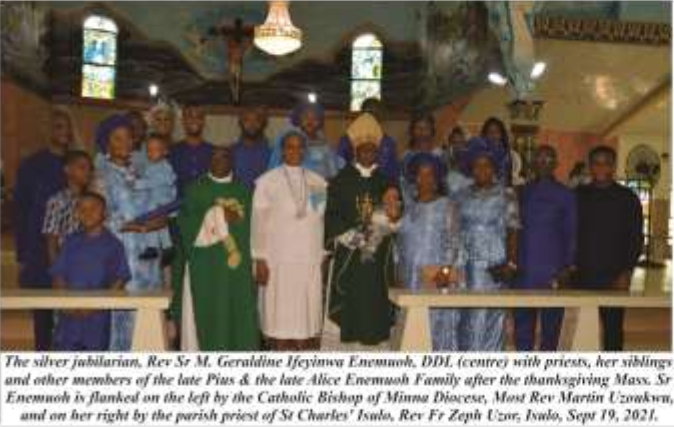 She appreciated her siblings, who, she said, had been very supportive and had never been a burden to her. The Isulo indigenous religious thanked the bishop, priests, reverend sisters and all who joined her in the celebration of God’s goodness and love for their presence and support.

The reverend sister thanked God for his grace and sustenance, which, she said, had kept her on for the 25 years she had spent in the vocation, praying for his God’s continuous guidance and sustenance.

Sr Enemuoh, who is currently working in London, thanked God for the COVID-19 lockdown and the travel ban which was eased and made it possible for her to celebrate the anniversary in her home town, Isulo.

Rev Sr Enemuoh appreciated the Isulo Catholic Community led by the parish priest of St Charles’ Isulo, Rev Fr Zeph Uzor, for their gift and support to her. She prayed God to perfect the joy of her anniversary by calling more Isulo people into the priestly and religious vocation.

The silver jubilarian congratulated the children who received the First Holy Communion in the course of the thanksgiving Mass. She described them as Jubilee candidates who were dear to her heart and urged the children to always desire Jesus Christ whom they received in the Holy Eucharist.

Earlier, when he led in the concelebrated thanksgiving Mass, the Catholic Bishop of Minna Diocese, Most Rev Martin Igwe Uzoukwu, thanked God for the gift of vocation to the Church. Bishop Uzoukwu, who also marked the Silver Jubilee Anniversary of his episcopal consecration, congratulated Sr Enemuoh on her anniversary.

Citing Psalm 107, the Catholic prelate described children as gifts from God and admonished parents who prevented their children from answering God’s call to priestly and religious vocations to desist from such.

In his homily, the parish priest of St Charles’ Borromeo Parish, Isulo, Rev Fr Zeph Uzor, congratulated Sr Enemuoh holding on to the vows of obedience, chastity and poverty for twenty five years. He prayed God to, on the occasion of the silver jubilee anniversary, hearken to the prayers of the jubilarian and open doors of increased vocation to priesthood and the religious in Isulo.

The parish priest, who expressed his delight that Rev Sr Enemuoh, DDL, celebrated her anniversary in good health, prayed God to sustain her up to her fifty years jubilee anniversary.

The Catholic Community thanked God for the gift of the first indigenous priest of Isulo, Rev Fr Emmanuel Chibuike Oguejiofor, who was ordained on July 19, 2019, attributing it to the commitment and prayers of Sr Enemuoh.