Isuaniocha in Awka North LGA, Anambra State, last Wednesday, December 15, played host to many priests, religious and lay faithful from all walks of life. It was on the occasion of the funeral ceremony for the late Rev Fr Matthew Odirachukwu Attansey, who was until his death, the administrator of the Catholic Diocese of Awka’s St Patrick’s Cathedral, Awka, and Episcopal Vicar, Awka Region.

The deceased, who died at the age of 73 in the USA on October 1, 2021, and was buried at the Awka Diocesan Priests’ Cemetery on December 7, 2021, was ordained a priest of the Catholic Diocese of Awka on June 30, 1979. He was the first indigenous Catholic priest of Isuaniocha.

A former president general of Isuaniocha Town Union and a former Deputy Director I of Fides Media Ltd, the late Fr Attansey was described jovial and a man of peace. He was said to have championed the cause for peace in Isuaniocha and in Awka North LGA. 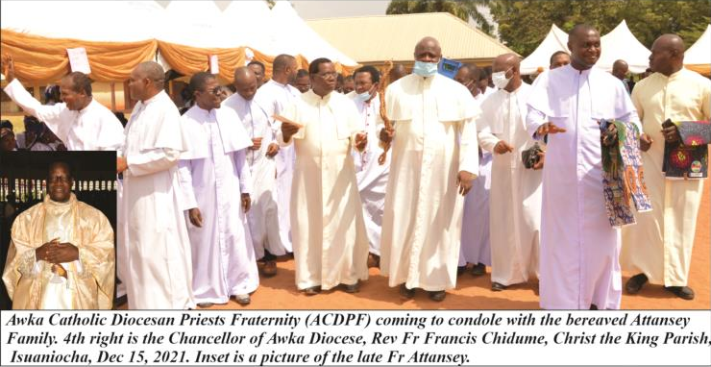 In his homily, the parish priest of St Joseph’s Catholic Parish, Achina, Aguata LGA, Anambra State, Rev Fr Patrick Amobi Chukwuma, thanked God for the gift of Fr Attansey, who, he said, carried out his duties well as a priest and as an individual.

Rev Fr Chukwuma, who served as a former administrator of St Patrick’s Cathedral, Awka, described the deceased as a jovial man and a man of peace, recalling that he was still in secondary school when Fr Attansey was ordained a priest.

Pointing out that death was a necessary end, Fr Chukwuma, enjoined all to spend their lives as ideal Christians and in preparation for death so as to die in the Lord.

He prayed for the happy repose of the soul of the deceased.

The homilist stressed the need for the laity to pray for and support their priests as expected so as to enable them (the priests) to carry out their priestly duties, which, he said, were demanding.

Fides reports that the Awka Catholic Diocesan Priests’ Fraternity (ACDPF), Old Awka Parish Priests and Religious Association; Association of Past Presidents General; CWO, Awka Region; Isuaniocha Catholic Community and all the parishes which the late priest served in in his 42 years as a Catholic priest, among others, attended the funeral, and paid condolences to the bereaved Attansey family.