The maiden Ofala Festival slated for three days, commenced on December 27 at Igwe’s Palace, Enuofufe Village, Isiagu, and was concluded on the 29th at Community Secondary School, Awa.

Fides gathered that the first day of the festival had all the villages converging on the Igwe’s Palace to receive a cow presented to all the villages by the traditional ruler together with bags of rice and other food items.

Leading in the concelebrated Holy Mass that commenced the Ofala Festival, the Catholic Bishop of Awka Diocese, His Lordship Most Rev. Paulinus Ezeokafor, emphasized the importance of a servant leader and urged the traditional ruler to lead the people with the fear of God. 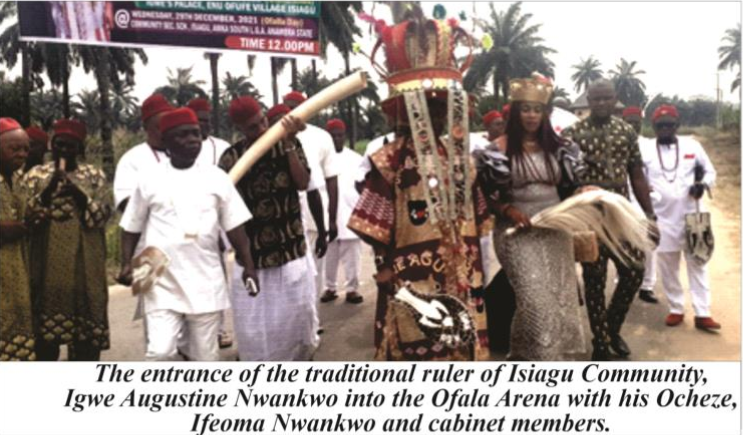 He noted that for the traditional ruler to function optimally, the cooperation and support of the people was needed and he beckoned on the people of Isiagu to assist their royal father for qualitative development of the community.

In an address of welcome, the traditional ruler, Igwe Augustine Nwankwo, described Ofala Festival as the seal that showed the cordiality between a traditional ruler and his subjects, adding that the celebration offered an opportunity for a community to appreciate God and their royal father.

He disclosed that he had been working assiduously to uplift the general welfare of the people since his coronation in 2011 and subsequent presentation of certificate of recognition under the leadership of Mr. Peter Obi. He described peace as a panacea for modern development and revealed that he was able to restore peace to the community by reconciling various warring sides in order to fast track progress in the community.

He said that within his 11-year reign on the throne, he had attracted many developmental projects which included the Isiagu Ultra-Modern Civic Centre; the Federal Housing Project; and the Anambra State International Market, noting that he saw to the fencing of the Community Secondary School and construction of two lockup stores at Afor-Isiagu Market.

He disclosed that he installed electricity to the community through his company, A-Tamal Investment Limited, and also paid the counterpart fund to the Anambra State Government for the asphalting of the Ugwuajirija, Isiagu, Umuawulu Road before he became the traditional ruler.

He assured the people of Isiagu Community that more developmental projects would commence soon as plans for such had reached an advanced stage and beckoned on those conferred with chieftaincy titles in the community to join hands and assist in the development of the town.

Speaking to Fides after the conferment of Adakaibeya Chieftaincy title, Senator Uche Ekwuunife reaffirmed her commitment to assisting the community to develop optimally.

Sen. Ekwunife who was represented by Dr. Rose Nwankwo, said that the honour conferred on her was an encouragement and would spur her to do more for the community.

The CEO of Stelconic Properties Limited, Chief Sir Chukwuemeka Nkem Pat Orjiakor, who was also conferred with chieftaincy tittle, promised to keep up responsibility bestowed on him and described the honour as that given by God.

Chief Orjiakor who dedicated his title to God, said he would sponsor the training of five indigent students in the community and urged other wealthy people to use their wealth to make the face of the world better.