Is suffering your portion?

As I was taking an evening walk penultimate week, I came across a crowd of people standing emotionally around a mobile man of God who was preaching in a village square. The theme of his preaching was “Suffering is not your portion.” I was dressed in local outfit. I took interest and stood behind the crowd. He was   shouting into a microphone mouthpiece with his saliva spreading like rainfall.

Thank God my face mask was in my pocket. I brought it out and covered my mouth and nose, to avoid any accidental discharge from the extra-large mouth of the man of God. He shouted, “Children of God listen to me! It is not your portion to suffer! How can God allow his children to suffer?” He asked the people to repeat after him, “God did not create me to suffer but to enjoy.

Suffering is not my portion! Poverty is not my portion! Blessing is my portion!” The people repeated the four sentences on top of their voices severally. Then he asked them to come out and sow seeds in cash or kind in order to avoid suffering or poverty. The bigger one sows, the bigger he reaps. First come, first luckier. The people were struggling to do the sowing. Some sowed all they have. 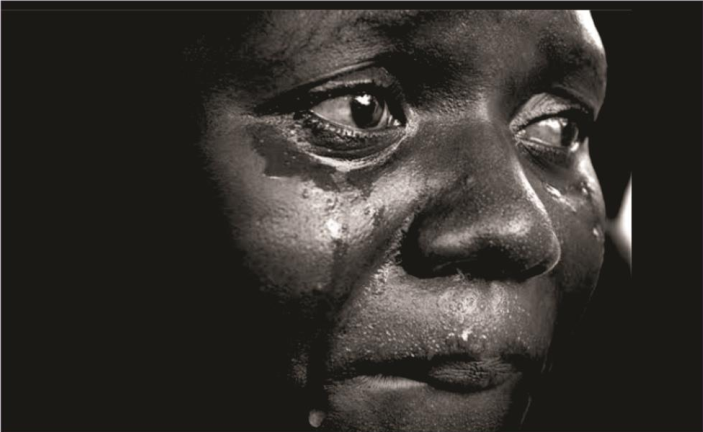 The man of God rebuked him, “Take away that nonsense from here. If you were God, would you accept it?” With trembling the poor man took it away and went home sad. Imagine the man of God using the name of God in vain and to extort.

When everywhere was calm I raised a lone voice from behind and shouted, “Suffering is my portion! Man of Satan, stop using the name of God to deceive gullible villagers!” The man of God or Man of Satan through the microphone asked, “Who is that foolish man? Stewards, bring him here for deliverance.” Three of his stewards immediately surrounded me and wanted to carry me shoulder high with force.

I resisted and asserted, “Don’t touch me because I am God’s anointed.” One of them asked me, “Who anointed you?” I replied, “God anointed me a priest in the Order of Melchizedek. I am a Reverend Father.” Instantly the stewards knelt down and asked me to  bless them.

The man of God was dumbfounded and was sweating profusely. He moved a short distance away and pretended answering a distress phone call. Afterwards he lied to the crowd, whom he milked dry, that his wife was involved in a car accident. Therefore he must leave with dispatch to attend to her because delay is dangerous. He packed the sowed seeds in cash and kind into his open vehicle.

He dismantled his mobile address system. When he was about to enter the vehicle, one of the seed sowers asked him when the seeds they sowed will germinate. He answered, “As soon as rainy season begins in earnest.” The man who sowed the big goat wanted to take it back due to doubt. The man of God shouted at him, “If you do it, thunder will strike you dead.” The man stood confused. In a twinkle of an eye, the man of God disappeared. The game was over.

Immediately he left, I mounted the rostrum to correct his wrong teachings. I began by making the Sign of the Cross. Many among the crowd did it with me. I understood that they shared the same faith with me. I introduced myself as a Reverend Father of the Catholic Church. With one voice they shouted, “Father!!!!” Emphatically I shouted, “Suffering is my portion and your portion!” Many voices responded, “Yes-o-o!” But a few responded, “God forbid!” Then I cleared my throat and said, “The Cross is the symbol of Christianity.

Suffering is our portion as Christians because Our Lord Jesus Christ suffered in order to save us. In other words, there is no salvation without the Cross. Jesus Christ admonished, “If you wish to be a follower of mine, take up your cross daily and follow me” (Luke 9:23). Nothing good comes easy. Saint Paul vehemently told the Thessalonians not to eat if they refused to work (2 Thess. 3:10).

Without the Cross there can be no victory. Since the fall of man from grace to grass, suffering has become part and parcel of humanity. God without mincing words said to Eve, “I will increase your suffering in childbearing, and you will give birth to your children in pain. You will be dependent on your husband and he will lord it over you” (Gen. 3:16).

Have you not seen a pregnant woman about to give birth wreathing in great pains? To the man Adam God said, “Curse be the soil because of you! In suffering you will provide food for yourself from it, all the days of your life. With sweat on your face you will eat your bread, until you return to clay” (Gen. 3:17,18). Nwoke na ike!

Today things have fallen apart drastically because many refuse to learn from history. Many false prophets, priests, pastors and men of God have complicated matters by teaching that suffering is a curse. The youths who have refused to work are largely deceived into obtaining wealth trickishly and in occult ways.

Hence ‘mbute ike’ (obtaining power by all means) is on the increase. Such false prophets hammer on division of labour in God’s vineyard ( E kere oru eke). The lazy young men are tricked into becoming millionaires and billionaires by bathing in a river or sacrificing a lamb to the gods. Many others engage in human rituals to get rich overnight.

Regrettably a lot of innocent persons are missing here and there. Some boys gruesomely murder their girlfriends to make huge money, which most often does not materialize. A student of a higher institution in Owerri recently attempted to kill his biological mother who came to visit him for blood money. Luckily the mother escaped with bloody wounds.

All over Nigeria nowadays, kidnapping for ransom is now a daily lucrative business. The bushes have turned into business centers for kidnapping and payment of ransom. The lives of travelers are in danger here and there. Terrorists, bandits, herdsmen, cultists, ritualists, yahoo boys, etc are involved in this human business to make quick money.

The greatest problem in our country today is insecurity. The federal government seems not to have any solution to offer. We are left to our fate. Many innocent persons are missing. Many have lost their dear lives. Travelling by land is now as dangerous as going to hell on foot.

How many people can afford air fares? Sometimes there is scarcity of aviation fuel. Even some people are kidnapped from their houses. Human life has been devalued so much. It has been observed that some of the perpetrators of these heinous crimes are foreigners. How did they come into this country?

We are crying to Heaven for help. Only Divine intervention can rescue us from this hopeless situation. The message of Easter is hope. There is hope in hopelessness. We look up to the Risen Christ who conquered death to urgently come to our aid.

May he grant us forgiveness for our numerous sins! May he remove the spirit of hatred in us and infuse us with the spirit of love. May we Nigerians realize once more the value of human life! Only God has authority over life and death. I wish all Nigerians happy Easter. May the Light of Christ dispel the thick darkness in this country so that we can see the glory of God!  Amen!