On the conclusion of the Regina Coeli today Sunday 29th May,2023 Pope Francis said that on Saturday, 27 August, he will hold a Consistory for the creation of new cardinals. The College of Cardinals currently consists of 208 Cardinals, of whom 117 are electors and 91 non-electors. As of 27 August, the number will grow to 229 Cardinals, of whom 131 will be electors. let us briefly look at some issues concerning Cardinals in the Catholic Church and to find out if Cardinal Elect Peter Eberechukwu Okpaleke is still the Bishop of Ekwuluobia Diocese. 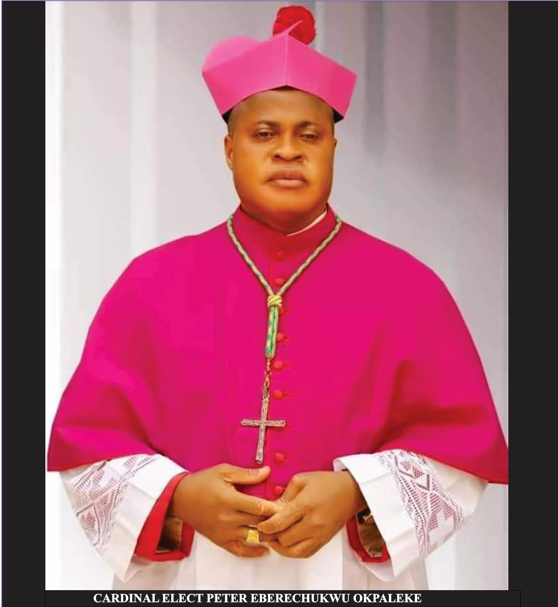 Eight of the newly named Cardinals are from Europe, six from Asia, two from Africa, one from North America, and four from Central and Latin America. They include,

+Peter Ebere Okpaleke was born on 1 March 1963( 59years Old) . He is From Amesi in Aguata local government area of Anambra state, Nigeria.

The holy father Pope Benedict XVI on December 7,2012 appointed him as the Bishop of Ahiara Diocese in Imo state. He was consecrated Bishop on May 21, 2013 at seat of wisdom seminary Owerri.

However,with the twist of events that stalled his Installation as the Bishop of Ahiara Diocese and in line with his determination to always make room for whatever that would promote evangelization and expand God,s kingdom on earth, Bishop Peter Okpaleke resigned his position as Bishop of Ahiara, a resignation that was accepted by pope Francis on February 19,2019.

By the grace of God, the same Pope appointed him as the first BIshop  of  Ekwulobia Diocese on  March 5,2020.

With the appointment of Cardinal Elect, Peter Eberechukwu Okpaleke, the numbers of Cardinals that has come from Nigeria has risen to five. They include;

3  Cardinal Francis ARINZE (89), Cardinal-Bishop of Velletri-Segni and Prefect emeritus of Congregation for Divine Worship and the Discipline of the Sacraments.

It might interest you to know that Only Cardinal John Onaiyeken and cardinal Elect Peter Eberechukwu Okpaleke will be able to vote in future conclave to elect a new pope because they are still under the age of 80. cardinals above the age of 80 are not allowed to vote in a conclave.

A cardinal is a senior member of the clergy of the Catholic Church, immediately behind the pope in the order of precedence. Collectively, they constitute the College of Cardinals, and are appointed for life.

The title of cardinal is bestowed by papal appointment. Cardinals perform two primary duties: to act as advisers to the pope at his request, and to eventually elect his replacement. Upon a pope’s death or resignation, the College of Cardinals elects a member of the church to serve as the new pontiff (cardinals over age 80 may not vote). While a two-thirds majority vote is initially required to elect, a pope may be elected by a simple majority vote if nine days of voting produce no winner.The voting process last occurred in 1978 with the election of Pope John Paul II.

The three ranks of cardinals are cardinal bishop, cardinal deacon, and cardinal priest.

CARDINAL BISHOPS: Only six cardinals hold the title of cardinal bishop. Each cardinal bishop holds jurisdiction over a church in a suburb of Rome. These cardinals work in departments of the Roman Curia, the central administration of the church.

Often called “the pope’s cabinet,” cardinal deacons also work full-time in the curia. The senior cardinal deacon has the honor of ceremoniously announcing the newly elected pope from the balcony of the Vatican.

Most cardinals are bishops and archbishops leading dioceses and archdioceses around the world – often the most prominent diocese or archdiocese in their country. By his appointment, Cardinal Elect Peter Eberechukwu Okpaleke belongs to the rank of Cardinal Priest and is still the Bishop of Ekwuluobia Diocese until the pope assigns him further functions in the church.

There are no strict criteria for elevation to the College of Cardinals. Since 1917, a potential cardinal must already be at least a priest, but laymen have been cardinals in the past. The selection is entirely up to the pope and tradition is his only guide.

A cardinal in the Catholic Church is addressed with the title of His Eminence.

Once more, Congratulations to all the new cardinals elect especially our brother,  His Eminence, Cardinal Elect Peter Eberechukwu Okpaleke. May God continue to strengthen him, Amen.