Investment in Education, Not a Waste – Bishop Okpaleke

At a time when investments on frivolities more than education, especially by state governments and corporate organizations, seem to be at an all-time high, the Bishop of the Catholic Diocese of Ekwulobia, CADEK, Most Rev. Peter Eberechukwu Okpaleke, says any investment made in education cannot be considered a waste; rather, one in the future  development of society. 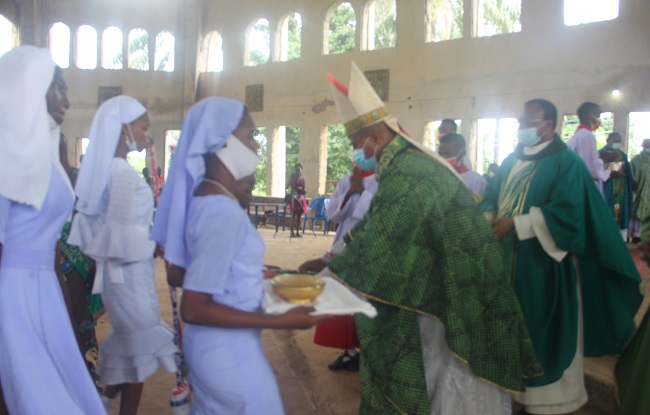 The Confirmed candidates during offertory procession

The cleric who said this, Sunday, July 4, while delivering a homily at St Anthony’s Catholic Church, Ikenga, Aguata Local Government Area of Anambra State, where he peformed multiple functions, during his pastoral visit and celebration of Patron Feast’s Day, confirmed scores of candidates as full members of the Catholic faith and also commissioned projects belonging to St Anthony’s Secondary School, Ikenga, SASSI.

Among the projects commissioned by Bishop Okpaleke were the first functional borehole in Ikenga Community; a donation by Gerald and Barbra Baumgart, American benefactors of St Anthony’s Secondary School, Ikenga; an ultramodern toilet; a Chapel of Perpetual Adoration and a power plant.

The Catholic Prelate in his homily appreciated the Baumgarts who made a donation of 46-thousand dollars; about 23-million Naira equivalent, for the borehole project, and beseeched God to replenish them as they invested in a project that would aid in the proper formation of young ones.

While he also lauded the efforts of the Permanent Secretary, Anambra Ministry of Education, Barr Christy Obiano, towards the development of education in the state, Bishop Okpaleke explained that she was on ground to show her support to the students and the community, adding that proper formation was holistic. 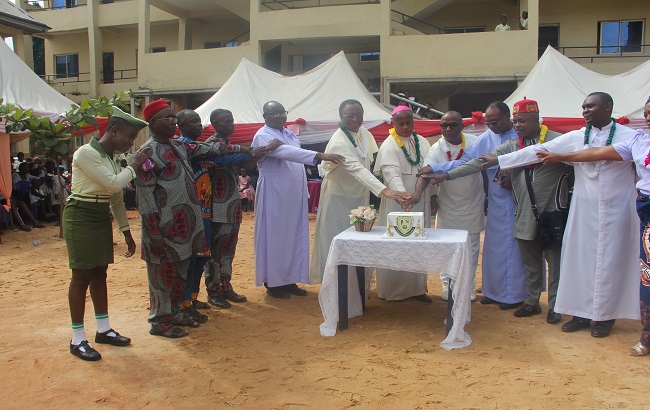 The candidates for confirmation were urged not to trivialize the gift of the Holy Spirit which they received through the laying of hands and anointing with the oil of Chrism, as well as to be prepared for the fight of faith which would always be before them.

At the reception, St Anthony’s Catholic Secondary School, while welcoming the bishop, described the day as one that was special in the annals of the school’s history and added that his presence was a testament to his unquantified love for the school.

They appreciated other guests, including Rev. Fr Benjamin Ewelu, Education Secretary of Ekwulobai Diocese and the Chairman of the occasion; and Chief Livinus Anagbogu, who noted in his opening remarks, that religion and education operated simultaneously as one complemented the other. 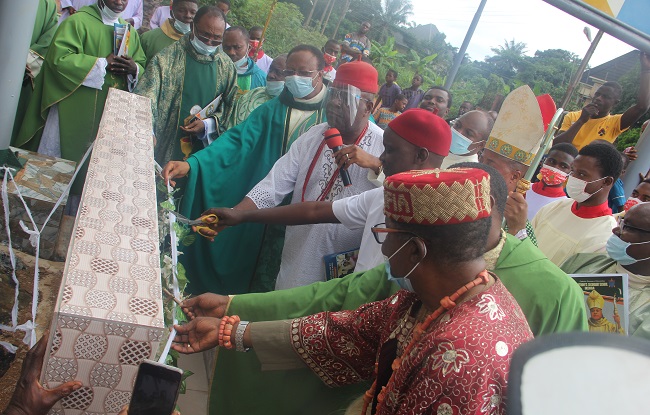 While they outlined some of their challenges, Rev. Fr Anagbogu and Hon. Ikechukwu Anakor, President-General of Ikenga Town Union, expressed pleasure at the completion of each of the projects and disclosed that the community had attempted several times to no avail to have a functional borehole.

The school Manager told Fides in an interview that the water drilling company made four attempts before succeeding in getting water at 1,050 ft, adding that they had to alter their agreement with the company a couple of times, which, he said, also gulped some money. He added that the project, including channeling of water to appropriate places, cost 46-thousand dollars